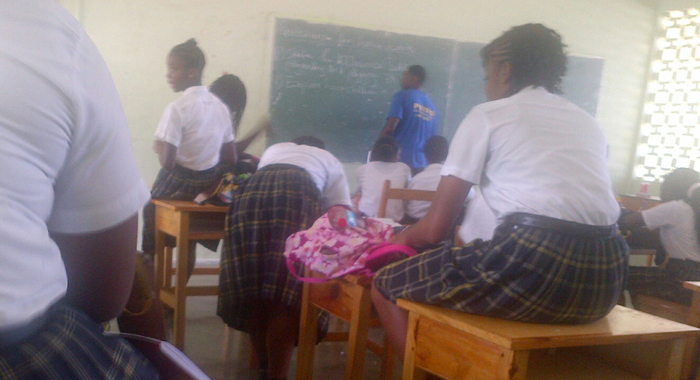 Some students at the Petit Bordel Secondary School have been without chairs since school re-opened on Sept. 7.

Some fourth and fifth form students at the Petit Bordel Secondary School are hoping that the Ministry of Education will this week provide them with chairs as they begin the third week of the new school year.

The fifth form students, especially, are looking forward to receiving the furniture so that they can focus on their upcoming exams rather than be distracted by the discomfort of sitting on desks or writing while standing up.

I-Witness News understands that some fourth form students and the majority of the fifth form students at the North Leeward school have been without chairs since the new school year began on Sept. 7.

“Teachers are unable to teach and students have to stand and write,” said a source which called the situation to the attention of I-Witness News but requested anonymity.

Another source, who also asked not to be identified in this story, told I-Witness News, on Sunday, that

the school has been asking the Ministry of Education for chairs for the students and up to Friday, no chairs came.

“Some students of Form 4 are without chairs, and about 90 per cent of the fifth form class do not have chairs. Desks are available but not chairs.

“As a teacher, it is hard to actually give the students work and deliver a lesson effectively because the students are standing,” a teacher who requested anonymity told I-Witness News.

I-Witness News was told that a student with an amputated leg is among those who do not have a chair to sit on and has not returned to school since Wednesday.

“The school had called the Ministry of Education on several occasions about the issue and still no chairs were sent,” a source said.

I-Witness News was told that officials from the Ministry of Education have come to the school since the beginning of the new school year.

“What is most disgusting about the situation is that the Ministry of Education sent officials there to look at teachers’ lesson [plans] and they have classes without chairs,” another teacher said.

Despite that there is a clear and obvious need, the situation regarding insufficient furniture at the school has not been addressed.

“The students complain about how difficult it is for them and the amount of pain they experience from standing up and bending over to write.