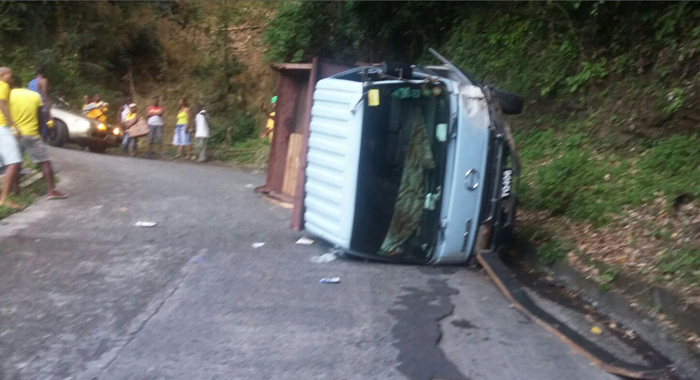 The truck, TQ406, fell on Shirley Baptiste’s leg when it overturned.

Leader of the Opposition Arnhim Eustace says he was alarmed to hear that some persons rejoiced over the vehicular accident on the weekend in which some supporters of his New Democratic Party (NDP) were injured.

Several persons were injured when a truck, TQ406, carrying NDP supporters from North Windward to Chateaubelair overturned in Gordon Yard on Saturday.

Among them is 32-year-old Sandy Bay resident Shirley Baptiste whose right leg has been amputated just above the knee because of injuries she suffered in the incident.

“I don’t know what our society is coming to,” Eustace said on his weekly radio programme on Monday as he spoke of the rejoicing over the accident.

He said that even if people are on different political sides, laughing about such an incident tells him something about the society.

“A human life is almost lost. There is injury, permanent injury, but there are those who are rejoicing. It is really unbelievable to hear some of the stories I have been hearing about people who are amused and happy about this,” he said.

“I want to say to Shirley that we understand the situation and the New Democratic Party will play its role in this regard and to give her the assurance that things will improve.

“We can’t get to the point where we will remove everything, every hurt, every pain, but at least we make life more bearable and bearing in mind the young children and the fact that she will be alone in the hospital for some time,” he said.

Eustace said the NDP was putting logistical arrangements in place to help Baptiste during her hospitalisation in Kingstown.

And, Lauron “Sharer” Baptiste, NDP candidate for North Windward, told I-Witness News on Monday that arrangements were being made to provide counselling for the injured woman.

Reports are that the truck’s brake failed, causing it to speed downhill.

The driver, realising what was happening, crashed the truck into a bank on the left side of the road as he tried to avoid going over an embankment, I-Witness News was told.

Reports are that the truck overturned and fell on Baptiste’s leg and injured several other persons, including the older two of Baptiste’s children.

The injured were treated initially at the health centre in Spring Village and later at Milton Cato Memorial Hospital, where Baptiste is a patient.