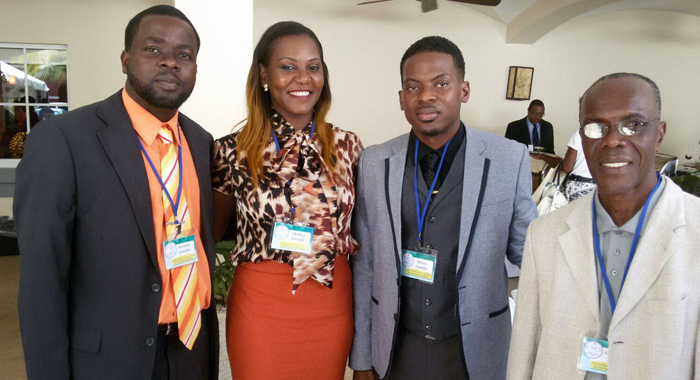 Two Vincentians were nominated for awards at the Caribbean Youth Entrepreneurship Summit held in Barbados on Sept. 24.

The summit, organised by Youth Business International brought together young entrepreneurs aged 25-35 from across the eastern and southern Caribbean to make keynote speeches about their work and how it has affected their countries.

She was nominated for the Start Up Entrepreneur Award, which goes to the entrepreneur who has been trading for less than a year and is already demonstrating great business acumen.

The second delegate, Petrus Gumbs, is founder and director of the STEMSVG (more commonly known as the STEM programme) summer programme.

STEMSVG is geared towards youths aged 7 and over and is designed to guide youngsters in creating new and interesting things such as apps and video games, with their pre-existing knowledge.

This programme was nominated for two awards, namely, the Social/Environmental Entrepreneur Award, which goes to the entrepreneur whose business is helping to solve a social problem or effecting social change.

The second award was the technology Entrepreneur Award, which goes to the business that has demonstrated success at implementing or promoting technology.

At the event, the young entrepreneurs were encouraged to dream big, take risks, and project their “brand” onto the world stage.

The United States Ambassador to Barbados and the Organisation of Eastern Caribbean State, Larry Palmer, delivered remarks at the opening ceremony and congratulated over 21 young entrepreneurs who showcased business ventures including jewellery handcrafted by survivors of abuse and domestic violence, image consulting, computer animation, cosmetic production, and food goods.

“These 21 entrepreneurs represent what you can achieve when you are willing to follow your dreams, take risks, and work hard. I encourage each and every one of you to keep up the hard work and to support the next wave of entrepreneurs that will follow in your footsteps,” Palmer said.

Underscoring the United States Government’s commitment to regional youth empowerment, the ambassador said that the USAID-funded Youth Entrepreneurship Program for the Eastern Caribbean (YEPEC) supported over 1,500 businesses, provided loans to 69 businesses, and created 175 jobs. Ambassador Palmer also highlighted that YEPEC also strengthened the capacity of Youth Business Trusts in Barbados, Dominica, and Trinidad and Tobago, while creating a new trust in St. Vincent and the Grenadines.

“Youth have an innovative and creative spirit that they bring to everything that they do. When this approach is taken toward entrepreneurship, they are not only helping themselves, they are generating income for their communities and employment for others. Entrepreneurship and small businesses are the engines of an economy, so it is gratifying to be able to support youth entrepreneurs in particular,” Cushing said.

The US$2 million three-year YEPEC programme expands access to entrepreneurial support activities for young people throughout the Caribbean, while developing the capabilities of Youth Business Trusts.