DRP campaigning against dangerous chemicals and GMOs in agriculture 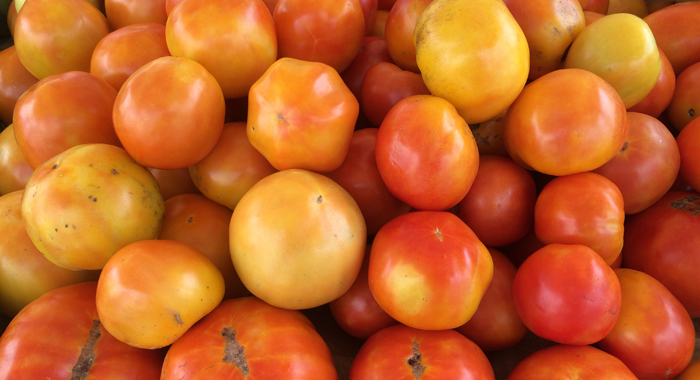 Baptiste says some farmers have complained that plants from seeds of some tomatoes do not produce. (IWN photo)

There are chemicals being sold and used in agriculture in St. Vincent and the Grenadines that have been proven to cause cancer, infertility and other health issues and should be banned.

So says Anesia Baptiste, Leader of the Democratic Republican Party (DRP), who also called for a ban of genetically, modified organisms (GMOs) and genetically engineered seeds in agriculture.

She identified Roundup, Monsanto’s branded version of the herbicide glyphosate, and Touchdown Ultra, another brand of the chemical and Malathion, which is used to spray mosquitoes as chemical that should be banned in SVG.

In March, the World Health Organization’s International Agency for Research on Cancer concluded that glyphosate is a “probable” cause of cancer.

Monsanto officials denounced the announcement as “agenda-driven” and contradicting the consensus among global regulators.

Speaking at a rally of her DRP last week, Baptiste said that in

May, the UN Cancer Research Agency issued a press release saying that glyphosate in weedicides and malathion cause cancers in animals and human beings.

She said that, as a result, many countries around the world have banned the use of these substances.

Baptiste said that recently, there was an attempt by Sen. Jomo Thomas, to raise the issue in Parliament, but after he spoke, Prime Minister Ralph Gonsalves “basically got up and shut it down” by making it seem as if everybody has their own method of staying healthy.

“But let me tell you something, glyphosate in Round Up and Touch Down Ultra, which we are using here, is not just a matter of a personal choice of staying healthy.

“The thing should be banned. It is against your very health. It will give you cancer. God alone knows of the connection that already exists from our use of it here and the many cancers we are seeing here and the increase of it here in St. Vincent and the Grenadines,” she said.

Baptiste said that if elected to office in the upcoming general elections, the DRP — which so far has announced three candidates while there are 15 constituencies — will ban the use of glyphosate in agriculture in SVG.

“We will ban the use of chemicals like malathion. We will ban these things because they are against the health and lives of our people.

“And let me tell you, if your people are sick, and they don’t have good quality of life, they can’t work in the new industrial revolution we want to create and therefore they can’t produce and, therefore, the country can’t go forward,” he said.

“So don’t come and tell me you are going to revive agriculture and revive bananas, as the opposition NDP saying, but you don’t want to address the dangerous chemicals we are using in agriculture. They don’t research about these things.”

Baptiste proposed alternative products such as Timorex Gold, which she said is basically tea tree oil mixed with water.

“It is basically a plant helping a plant…” she said, adding that other countries were seeing successes with it in the fight against black sigatoka, a plant leaf disease that affects bananas and plantains and similar species.

She also called for a ban of genetically modified organised (GMOs) and genetically engineered seeds in SVG.

She said some farmers have already told her that they notice that they use a certain set of tomato seeds and after they get the first crop, the seeds don’t grow.

“That, most likely, is a GE seed — a genetically-engineered seed. And that’s how it’s made. The intention is to keep the people completely, continually dependent on the ones who are making the seeds, the big, rich companies like Monsanto and St. Gent … and in the meanwhile, your very agricultural environment, your very soil is being destroyed, it becomes infertile after a while,” Baptiste said.

“You don’t want that in St. Vincent and the Grenadines. We have to protect and preserve our soil. It is our future. It is our life. It is our food security. And if we are going to make money from agriculture. we must address the issue, the threats to it from GMOs and dangerous chemicals and the DRP is the only political party in this country that has enunciated clear on television and radio over and over again and now here tonight … we will address that issue,” Baptiste said.