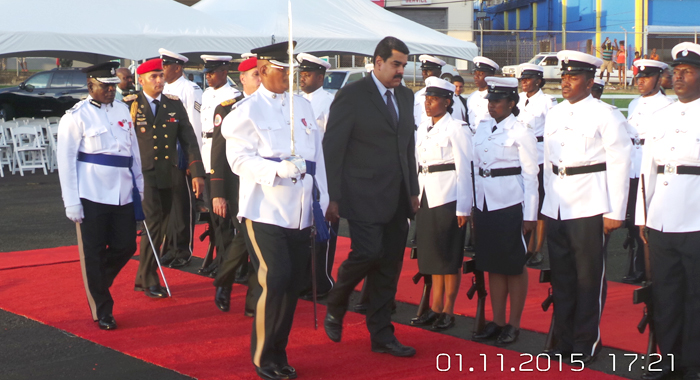 KINGSTOWN, St. Vincent, CMC – Venezuela president, Nicolas Maduro, Monday announced a new initiative that he said would bolster trade between Venezuela and the Eastern Caribbean as he wrapped up another of his one-day visits to the Caribbean Community (CARICOM) countries.

Maduro also said that Caracas would be willing to invest in St. Vincent and the Grenadines as the “hub” for the construction of low-income house for the region under PetroCaribe, the oil initiative his country has with several Caribbean countries.

“There should be no doubt in our minds that PetroCaribe today is the backbone of the energy, social, economic development of our regions,” he said, adding “we need to find a hub in this region where we can be the centre of construction of PetroCasas (houses) for the region.

Maduro, who also announced that his country would be making available, 7,500 lap tops to the government, said that through “fruitful discussions” between Venezuela and St. Vincent and the Grenadines government officials, agreement was reached on the “mechanisms in order to improve trade relationships between the two regions … in the fields of tourism, commerce, etc.

“In order to achieve these goals … I just want to announce the creation of a new tool that will be exclusively devoted to foster trade between the three regions of eastern Venezuela and St. Vincent and the Grenadines and the Eastern Caribbean.

“This will be called the Centre for Cooperation of External Commerce of Eastern Venezuela and the idea is to facilitate all the customs, transportation and operations for these projects [in St. Vincent and the Grenadines],” he added.

Maduro has in recent weeks visited a number of CARICOM countries, including Suriname, St. Kitts-Nevis, Dominica, Grenada and Antigua and Barbuda, drumming up support for his Latin America and Caribbean integration movement.

He took the opportunity here of urging Caribbean governments to see the wisdom of the integration movement saying if the theories of the past are continued to be applied today “they will result in the same poverty, unemployment etc.”.

While he did not call the United States by name, Maduro left no doubt that the policies of Washington as they relate to Libya, Syria and even some countries in Africa, have led to death and destruction.

He also blamed Europe for keeping quiet while hundreds of people try to flee the African countries by boat, some of them drowning in the process.

“No one is asking for forgiveness for Libya and Syria,” he said, reminding Latin America and Caribbean countries that “we are laying down the down the foundation for peace and solidarity…”

He said the region now has before it two models, “either we work together” or continue to work in isolation of each other.

“The path to unity is difficult, it is hard, but it is the path we have to follow,” Maduro said.

He said at a time when many countries, including Canada and the United States, had baulked at the idea of providing support to Kingstown for the airport, Venezuela and Cuba were among a handful of countries that assisted.

“And we have come a long way since then, and as you see it, it is a magnificent structure. Imperialism didn’t believe it would happen.

“And what it shows is that even in the most difficult circumstances, internationalist solidarity among friends will always triumph, that’s a lesson of this airport,” Gonsalves said, criticising also his political opponents who had also chastised the project.

Gonsalves said Caracas has helped his country in many ways adding, “I can tell you the entire world that St. Vincent and the Grenadines … have extremely strong bonds of friendship between the Bolivarian Republic of Venezuela and the people of Venezuela and these bonds are unbroken.

“They are based on high principles of sovereignty and the defence of independence, complementarity of our economies, non reciprocity in our favour regarding trade and collaboration of several hemispheric and global political issues,” Gonsalves said.