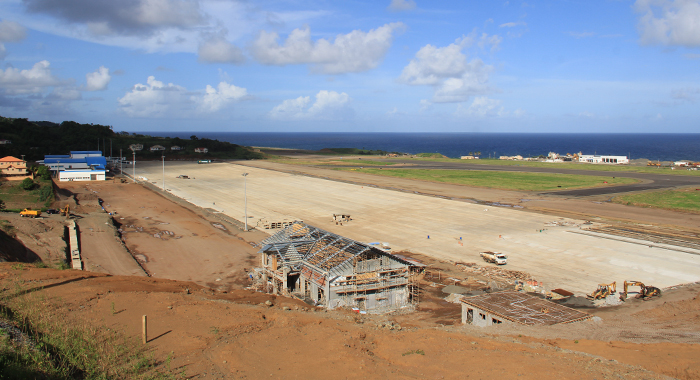 Argyle International Airport, seen here on Oct. 27, 2015, is slated to be completed by year-end. (IWN photo)

The international airport at Argyle will have a one of a kind orientation in the Caribbean, but a regional expert who has analysed the wind study data says the conditions are within the safety recommendation of the International Civil Aviation Organization (ICAO).

There have been concerns about the strength and direction of winds at the airport, and, in particular, the impact that crosswinds would have on aircraft during landing and take-off.

Glendell De Souza, science and technology officer at the Trinidad-based Caribbean Metrological Organisation, told the state-owned Agency for Public Information in St. Vincent and the Grenadines that analysis show that winds at Argyle come from and east north east direction, somewhere around 055 degrees to 110 degrees in direction from the east of St. Vincent.

“Now this is not abnormal, it is not unusual. The wind field is generally characterised by the northeast trade winds. So you are going to see [that] your winds are predominantly from the north east here,” he said.

“You do have winds that are higher than 16 knots, but the occurrence of such wind is not as frequent. The study characterised the winds up to 27 knots and above 27 knots. And in all cases, for each year, the wind above 27 knots was less than half a per cent of the data points.”

He said ICAO has made certain recommendations in its Annex 14 publication.

De Souza pointed out that these were recommendations rather than standards that must be met.

“And when we did the analysis for the crosswinds at Argyle for the period 2008 to 2012, where we will have consistency among the data points, you found that your wind, your crosswind components there were between 4 knots and 14 knots. So, your range was well within the recommendations of IACO.”

Head of the state-owned International Airport Development Company, Rudolph “Rudy” Matthias, said in September that the alignment of the runway at Argyle is 0422.

De Souza told the API that none of the airports he knows in the region might have the same orientation as Argyle.

He said that Trinidad might be closest to that orientation.

De Souza said that crosswinds are a reality of airports in the region.

“Throughout the region, we are all going to have crosswinds. The strength of the crosswinds may be different because of where the high-pressure system, which is creating your wind flow, is located in the North Atlantic. But, other than that, throughout the region, all airports, all of them will have crosswinds. The magnitude and the strength may differ from time to time but they will all fall within the same range,” he said.

Argyle International has missed completion deadlines annually since 2011, but when completed, will replace E.T. Joshua Airport at Arnos Vale, the nation’s main aerodrome.

De Souza said that there are both crosswinds and tailwinds at E.T. Joshua Airport, adding that crosswinds are generally not an issue.

“What will happen if you have very strong crosswinds, which is not the case at Argyle, the country dealing with that airport will have to publish the strength of the crosswinds ad make it available to all airport users,” he said.

He told the API that in the case of Argyle, because the average crosswinds is between 4 and 14 knots, which is well within the recommendations of ICAO — 13 to 20 knots, which may even be exceeded by the individual aircraft manufacturer.

Crosswinds are most problematic on the landing but these things are taught to the pilots how to land the aircraft safely in crosswinds situations, both high and normal “and they generally put down the aircraft on the tarmac properly, I would say 99 per cent of the time,” De Souza said, adding that there have not been problems in this regard in the Caribbean.

At ET Joshua, there is a problem when the tailwind exceed a particular value, because there will not be any lift under the wing when the aircraft is trying to take off, he explained.

The problem with tailwinds at E.T. Joshua Airport is that commercial aircraft are not allowed to take off landwards because they will be climbing over mountains during the most dangerous part of their ascent, “which you definitely don’t want to attempt.

“So, E.T. Joshua has its problems that they have been able to overcome and it has been in use for a long period of time.

“Argyle may have some problems, which you may call teething problems, initially but as you continue to use the airport and people get more familiar with the way the winds behave and the terrain you have, you will find that it will be mastered quite easily and the safety of the passenger and the aircraft will always be the number one concern, and that is what will be taken care of by the equipment you put in and the training offered to the people that needed to have that training…” De Souza said.

He said it is not true that there are no tailwinds at Argyle, adding that in every instance, there is headwind, tailwind and crosswinds.

“What the pilot wants is minimal crosswind, a strong headwind — because that provides the lift — and a weak tailwind, most, if not all of the time,” De Souza explained.

“In Argyle, there is a tailwind but the tail wind is relatively weak. There is a headwind also because of the direction of the wind with the aircraft, which will help it land and stop. And when it is ready to take off, the headwind will provide the thrust it needs under the wing to lift. The tailwind in Argyle will never be a problem as in ET Joshua.”

He said the problems at E.T. Joshua Airport are mainly because of the mountain and the length of the runway.

“You don’t have that problem in Argyle. Your runway is 2,700 metres — somewhere around 9,000 feet — and you have no mountain on either side of the runway. So, those are problems that have been eliminated.”

It meant that based on ICAO standards they will do 2,620 readings in a year.

For Argyle, the wind report was 567,900 readings for one year because of the amount of reading taken a day, De Souza said, adding that 1,440 readings were taken daily, instead of the eight recommended by ICAO.

“It was for three stations,” he said.

De Souza added: “I will say not all of the stations operated continuously as not all of the data was used in this study because there were some pieces of data that I found was reflecting the wrong information, although I presented the results when I was showing the finding, the data did not come out into the final product, so to speak.

“So you have a volume of data that you can go back and look at and pull out a wealth of other information inside of there, but beyond the study of the wind.”

De Souza has some safety recommendation for officials to implement at the airport.

He recommended that their automatic weather stations be installed at a distance of 120 metres from the centre of the runway, one on either touchdown area or take-off area, and one in the centre.

“All of them are to compute not only the direction and speed of the winds but also your crosswinds, your headwinds and your tailwinds and that is displayed directly in the display area available to the air traffic management personnel.

“We also recommended that if it is possible for the equipment to broadcast what it is measuring to the pilots when they are looking to touch down the aircraft so that they will have the latest information as to the behaviour of the wind — direction, wind speed your cross winds, your headwinds so they will be able to make the final decision whether to land the aircraft or make a pass around if it is necessary because they don’t think the conditions match what they want.

“And that is the most effective way: one, measure and inform the person responsible for landing the aircraft.

“I hope the automatic method would be best, I hope it will be instituted, but if not, with the information available to the air traffic controllers, they will be able to pass it on to the pilots as they see it changing on the monitors within their systems,” said De Souza, who said  he hopes to be on the first flight into the airport.

3 replies on “Argyle airport runway to have unique alignment”