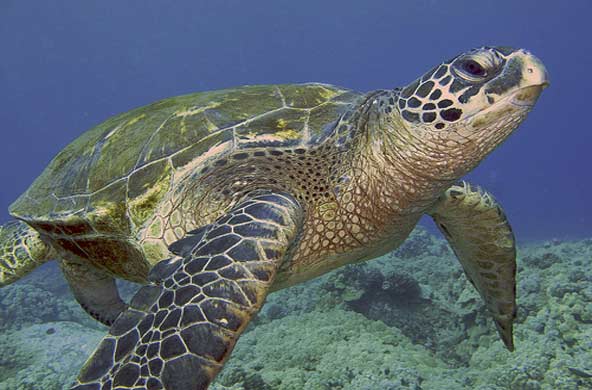 A 61-year-old Owia man survived a four-hour battle with a large turtle at sea on Saturday that triggered fears within the North Windward village that he had drowned.

The man, Calvin Nanton, also known as “Quazo” and “Gibbs”, said he was spearfishing near the Owia Fisheries Complex around 6 a.m. when he shot the green turtle, which he estimated weighed 500 pounds.

Nanton had hoped that the turtle would have been his third catch of the day, having speared an “old wife” (queen triggerfish) and a barracuda earlier.

He said he struck the marine reptile in the neck and held on to the fishing gun and the turtle then it began to swim towards the open sea.

“From the time I hit the turtle, the turtle start running,” Nanton told I-Witness News, adding that the animal will swim in burst then pause to rest

He said when they got to Salt Pond Point, he “started to see danger” as they turtle was pulling him further out to sea.

At that point, Nanton began to cry out for assistance.

Villagers who heard the cry for help assumed that the experienced fisherman had encountered difficulties in the water.

“Is the turtle I mean to help me with,” Nanton told I-Witness News.

But when the villagers who heard the cries for help no longer saw the fisherman in the water, they raised the alarm and summoned the Coast Guard.

In the meantime, Nanton continued to follow the turtle, hoping to land the biggest turtle that he has ever seen, and not wanting to lose his fishing gun.

By this time, he was far out in the Atlantic waters, but said he couldn’t estimate the distance from land.

“When I out in the ocean, all I seeing was Fancy school,” he said.

Nanton said that the spear could not come out of the neck of the turtle and he was tired and “fighting for my life now to go to land”.

So he decided to release the fishing gun and allow the turtle to swim away.

Nanton told I-Witness News that he was able to make his way to land in and area after Fancy, just before Charles Bay — heading north.

He said he saw a man fishing on the rocks and asked him to pull him onto the rocks, as he was very tired.

Nanton told I-Witness News that when he got to Fancy he was told that the alarm had been raised that he had died at sea.

Another Owia resident took Nanton back to the village in his vehicle.

“Before the guy reach up in the village, there was people cluster around me and asking me if I feeling any pain and if I hungry. All kind of questions they ask me,” Nanton said, adding that villagers also helped to support him as he was weak from the ordeal at sea.

Sea turtles are protected species in St. Vincent and the Grenadines, with the open season running from Aug. 1 to Feb. 28.

But during the open season for sea turtles, it is also illegal to catch, sell, buy or have in your possession undersized turtles or their shells.

The minimum weights for sea turtles that can be caught during the open season are: Leatherback turtles – 350 lbs; Green turtles – 180 lbs;

It is always illegal to interfere with the eggs and nests of sea turtles.

Anyone found violating these regulations is liable to a fine of up to EC$5,000.