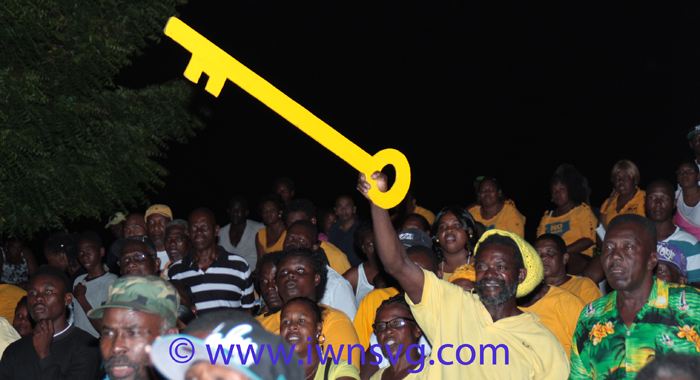 A man holds a key, the symbol f the NDP, at a party rally in June 2015. The party will hold its annual convention today. (IWN photo)

“I expected the date on or around the 7th of December,” Eustace said on his weekly radio programme, adding “so we have been working hard and we are going to continue and are going to make some adjustments to our programme”.

Prime Minister Ralph Gonsalves on Saturday night announced the date for the election, ahead of the March 2016 constitutional deadline. He told supporters of the ruling Unity Labour Party (ULP) that Nomination Day is November 20 and he is confident that the party would be elected for a fourth consecutive term.

In the last general election, the ULP won eight of the 15 seats at stake.

Eustace told radio listeners that the NDP would continue with its fundraising efforts to finance its election campaign and that he is “confident that there is a swing in this country to the NDP, but what I am concerned about is some of the actions you are hearing about”.

Eustace dismissed claims by Prime Minister Gonsalves that an NDP administration would roll back many of the social policies and programmes that the ULP government implemented since coming to office in 2001.

“And the bulk of it is just straightforward, dirty lies,” said Eustace, who will be making his fourth attempt to lead the NDP to victory.

He asked why a NDP administration would stop the rehabilitation of police stations, as Gonsalves said it would.

Eustace noted that citizens use the services provided by police officers and that the law enforcement agents are also housed at the facilities.

He said the government’s 15-point plans for a fourth term did not include the proposed tunnel under Cane Garden, an upscale community between Arnos Vale and Kingstown, which the ULP had touted in the past.

Eustace also reiterated his party’s commitment to expanding the Home Help for the Elderly programme, a ULP initiative, adding, “that programme should be expanded, and that’s what we intend to do”.

Eustace dismissed as “nonsense talk” a statement by Prime Minister Gonsalves that construction of a multi-national tourism project at Mt Wynne-Peter’s Hope in western St. Vincent would begin soon.

“All this is nonsense talk, real nonsense talk,” Eustace said, adding “that is why we are at the bottom of the list” in terms of stay-over visitors in the OECS, as he criticised the government’s tourism plans for the island.

The NDP leader told radio listeners that the Tourism Authority does not receive its budgetary allocation to market the country.

“They don’t know what they are doing, making a lot of financing mess in the country which is affecting the projects we have in the country. And if you affect your projects, you can’t get any new employment.”

Eustace reiterated his concerns regarding the voters’ list for the elections, saying that while some Nigerian students in the country qualify to cast ballot by virtue of their Commonwealth citizenship, there was an effort to register all of them in one constituency.

The Opposition Leader said the list of voters for East Kingston, which he has represented since 1998, now had the name of one of six people whom he said had been transferred illegally into the district. Eustace said there were also other concerns regarding the list in his constituency.

“All that is going on in East Kingstown, I am not guessing about it,” Eustace said, adding “so certain constituencies are being targeted for certain things, and the Nigerian issue is a part of that…

“The place is becoming more corrupt, in terms of the registration progress,” Eustace told radio listeners.