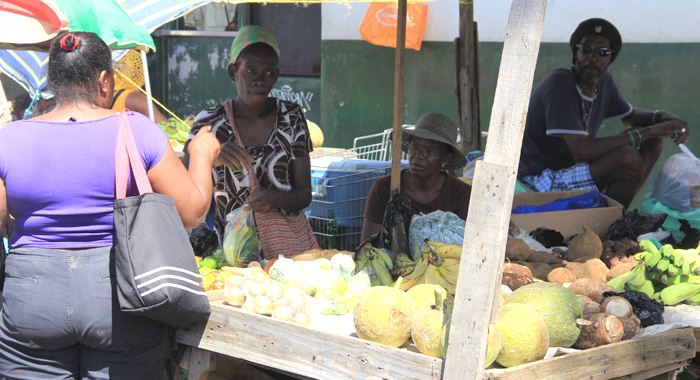 Vendors sell agricultural produce in Kingstown. Both the ULP and NDP have pledged to focus on the public sector if elected to government. (IWN photo)

The two main political parties contesting the Dec. 9 general election are promising to focus on the private sector if elected to office.

The ruling Unity Labour Party (ULP) has promised an Office of the Private Sector, a proposal touted for years by the main opposition New Democratic Party (NDP), which said it will also end “the competition” between state and private enterprises.

The NDP outlined its policy position in its manifesto, which was released online last week, saying that a thriving private sector is the foundation of a growing economy.

“The government of St. Vincent and the Grenadines however appears not to understand this basic fact,” the NDP says, adding that evidence of this is seen in an estimated EC$60 million that the government owes to the private sector.

The party described the debt as “a crippling burden for a private sector already weighed down by some of the highest energy prices in the Caribbean” and said it will reduce it by 50 per cent within its first year in office, if elected.

“The NDP’s position is that the debt to the private sector must be — and will be repaid.

“An NDP government will establish a Ministry of the Private Sector to facilitate the development and expansion of private industry in general and, in particular, we will immediately set up a working committee mandated to prepare an urgent plan for the repayment of this debt,” the party said.

“We consider that small and medium-sized enterprises are a critical factor in economic growth and we will create the conditions that will enable SMEs to play a major role in entrepreneurship, innovation and job creation.“

The NDP said that to create the environment in which small and medium-sized enterprises will thrive, an NDP government will “end the competition between government enterprises and SMEs”.

To aid SMEs, the NDP will also adopt and pursue appropriate fiscal and employment policies to promote an optimal economic environment and improve the attractiveness of entrepreneurship.

The manifesto says that the NDP will remove “the constraints to the development and growth of SMEs” through, a number of measures, including the re-establishment of a Development Bank to provide funding and financial support for SMEs, which is also on the NDP’s to-do list for year one, if elected.

There will also be establishment of a government-sponsored laboratory and Scientific Research Council to provide technical assistance for all new and expanding enterprises.

Fiscal incentives to the private sector include fostering strategic alliances between Vincentian and foreign companies to gain knowledge about market entry and export led activities.

The NDP also explained the role of its proposed Ministry of the Private sector, namely, to identify and seek to develop or expand a range of direct and indirect support services for SMEs.

Other support services that the ministry will provide are information services, including advice on government policies.

The ministry will also advise on the effective application of information, communication and business technologies to the business process.

It will provide consultancy and research services; managerial and vocational skills enhancement; and promotion and development of enterprise- based training;

The ULP also outlined the ways in which it hopes to strengthen the private sector if elected to a fourth consecutive term in office.

Addressing a rally at the Richmond Hill Playing Field on Nov. 7, during which he announced the election date, Prime Minister Ralph Gonsalves said the ULP will target a further reduction of the standard rate of corporate and income tax from 32.5 per cent to at least 27 per cent over the next five years.

A ULP government will work through the Eastern Caribbean Currency Union mechanisms to establish an Enterprise Fund and a Regional Development Bank for the Organisation of Eastern Caribbean States (OECS) to source credit facilities at competitive prices for start-up, business expansion, working capital, and private sector development generally, Gonsalves said.

The party will also strengthen the state-owned   Farmers’ Support Company to benefit farmers, fisherfolk, and agro-processors. The company provides loans to these groups of entrepreneurs at subsidised rates of interest.

If re-elected, the ULP government will build even more public-private sector partnerships and promote further innovation and productivity at all levels in the private sector, Gonsalves said.

The government will also address further to improve, in practical terms, each of the indicators/criteria in the World Bank’s “Ease of Doing Business” Assessment, and include even more private sector personalities on the boards and management structures of the public enterprises.

The government will also work with the private sector to create more jobs through various incentives and facilitations and set up an Office of Private Sector Development in the Ministry of Economic Development to better interface with businesses and their representatives, Gonsalves told party supporters.

The private sector in SVG has come under much strain over the past few years, with scores of businesses, including decades-old enterprises, closing their doors or scaling down their operations significantly.