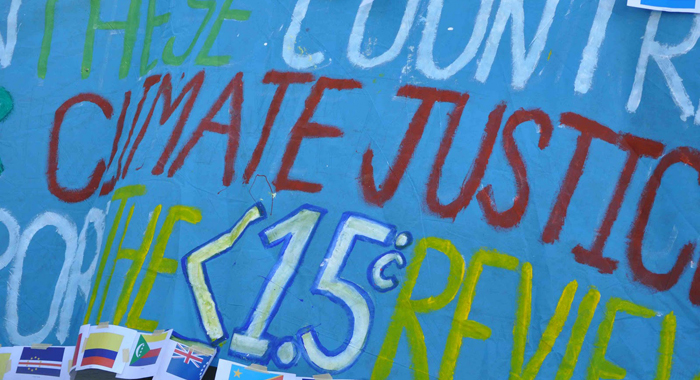 The challenge (see details) comes ahead of the international climate change negotiations set for Paris, beginning the end of this month, and is counted among the “1.5 To Stay Alive” campaign activities being rolled out across the region.

The campaign is to raise awareness, build momentum and enhance popular support in favour of the Caribbean’s negotiating position in the lead-up to and during the Paris negotiations, which constitute the 21st Conference of Parties (COP21) to the United Nations Framework Convention on Climate Change.

It highlights the need for 1.5 degrees Celsius as the target for a cap in increases in global temperatures, in the best interest of small island developing states, such as those of the Caribbean, who stand to be overwhelmed by super storms, sea level rise and coastal inundation, among other climate change impacts.

“The video challenge gives Caribbean people a chance to say, in their own words, why the 1.5 degrees Celsius target is important to them and, in doing so, speak directly to key actors at COP21,” said Petre Williams-Raynor, senior programme officer with Panos Caribbean, the organisation handling media outreach for the campaign.

“The hope is that these key actors will not only hear and respond, but also that in rising to the challenge, Caribbean people will get more acquainted with information on climate change and determine what they can do, in their own spheres of life, to make a difference,” she added.

Once created, selfie video makers are encouraged to — with #1point5ToStayAlive –post them to www.facebook.com/savethecaribbean or send them via e-mail to [email protected].

Meanwhile, St. Lucia Minister of Sustainable Development, Energy, Science, and Technology, Sen. James Fletcher has himself spoken to the importance of the 1.5 degrees Celsius target.

“The message is 1.5 to stay alive,” he said at the campaign launch in Castries last month. “The Caribbean needs a legally binding global agreement that keeps temperature increases below 1.5degrees Celsius above pre-industrial levels by the year 2100.”

According to the Fletcher, also patron of the “1.5 To Stay Alive” campaign, the region also wants the new agreement anticipated to come out of Paris, to provide adequate, predictable and accessible climate financing to support adaptation, mitigation and other climate change-related needs in poor and vulnerable countries, including small island states.

At the same time, a group of artistes — including Bélo from Haiti, Aaron Silk from Jamaica and Taj Weekes of Saint Lucia — are advanced in their work on a new climate song for the region. The song is to be performed at the Caribbean Pavilion at COP21.

Painter Jonathan Gladding has contributed a piece to the campaign while award-winning poet Kendel Hippolyte has added the weight of his voice, urging the region’s creative minds to join the effort.

The “1.5 To Stay Alive” campaign is a joint effort of Panos Caribbean; the Saint Lucia Ministry of Sustainable Development, Energy, Science and Technology; the Caribbean Community Climate Change Centre; the Regional Council of Martinique; and the Caribbean Development Bank.