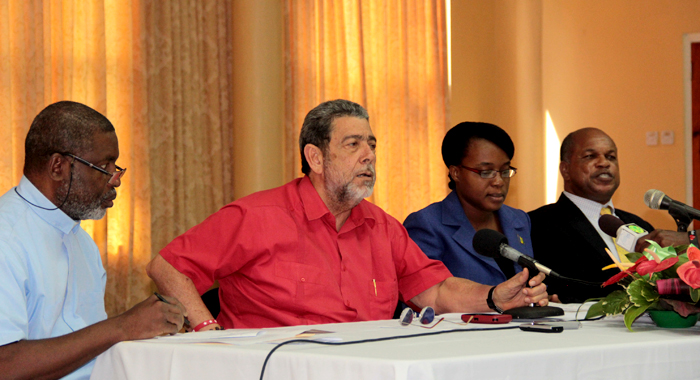 The two main political parties contesting the Dec. 9 general election, on Tuesday, traded verbal salvo at the launch of the code of conduct for the election campaign.

Prime Minister Ralph Gonsalves, who is political leader of the incumbent Unity Labour Party (ULP), was the first to speak and fired the first verbal missile.

“I am telling you, Father Mike (Monsignor Mike Stewart), being 15 years in opposition is not easy. And men who want to come in power will do desperate things,” Gonsalves said.

His comments came immediately after he spoke about a bottle-throwing incident in Petit Bordel on Friday during which the ULP candidate for North Leeward, Carlos James fired off a gun to quell the crowd.

“And to have another five years in opposition, particularly with some men — there is no women on the slate of the NDP — when you are in your late 50s and your 60s or, God forbid, if you pass the three score and ten, is a nightmare and desperation sets in,” said Gonsalves, whose ULP is seeking an unprecedented fourth consecutive term for a Labour government in SVG.

“Anesia doesn’t have to be desperate,” he said of leader and founder of the Democratic Republican Party, Anesia Baptiste, who also attended Tuesday’s event and signed on behalf of her party.

“She is a young woman with a tremendous future ahead of her; a good woman,” Gonsalves said of Baptiste, 35, who is a former member of both the ULP and the NDP.

“I am not levelling a charged against anybody, I am just laying the context,” he said.

Gonsalves said that he knows that normally at the signing, representatives of the political parties say a few pleasantries and go home.

“I’m sorry that given what has transpired thus far, I thought I necessary and desirable to say more than the pleasantries so that people can hear my voice and they can hear my assurances,” he said.

“I want to end with this: I love every single member of the NDP who is contesting elections. I tell you that with the purest of heart. I love them. And, if Linton Lewis — sorry, Dr. Lewis, Dr. Linton Lewis (Chairman of the NDP) were to find himself as a victim of a robbery on the highway while the Levite priest and any lawyer may pass him, I would stop by, as in the book of Luke, and I would clean his wound, I would bind them and I would take him and put him in an inn and I would pay the innkeeper to keep him until I return from my business to see if there is any other expenditure, because he is my neighbour and I love him,” Gonsalves said

“We have differences, but that does not mean that I do not love him,” Gonsalves said.

When it was his turn to speak, Lewis, who represented Leader of the Opposition and NDP president Arnhim Eustace at the event, said he was happy to hear that the Prime Minister loves everyone, adding, “but I don’t know that he loves me…

“But I appreciates that he does or that he says he does,” Lewis said.

Lewis, who, along with Gonsalves’ son, Sen. Camillo Gonsalves, and Ivan O’Neal of the SVG Green Party, will contest the East St. George seat, pointed out that the Prime Minister lamented that desperate men do desperate things and that it is not easy to be in opposition for 15 years.

“It is not easy, financially, for individual candidates,” Lewis admitted.

“But I have been a cricketer for number of years and we win some and we lose some. We understand that we can’t win all of them. That is etched in my consciousness.

“To be fair, even though a bowler bowls bouncers at me and he hits me in the chest, at the end, in the night, we have cocktails and it’s as if nothing ever happened. So I understand that,” said Lewis, a former national cricketer, who has failed three times to win a seat in the St. George’s constituencies.

“But I also wish to say that the Prime Minister understands full well also what it is like to be opposition for over 17 years,” Lewis said of Gonsalves who contested several elections before winning a seat.

“So, he understands the desperation and can speak to it. And that is reflected in the manner in which, in 2000, the roads were blocked and the efforts were made to make this country ungovernable by the then ULP administration to hasten the electoral process prematurely to have elections in 2001.”

In 2000, political unrest caused the NDP, which won a fourth consecutive term in the 1998 elections by a one-seat majority, to agree to early elections, which came in March 2001 and saw the party being voted out of office, after 17 years.

“I can’t find anywhere in the history of the New Democratic Party that anything of such nature has ever been done,” Lewis said of the roadblock of 2000.

“So let the court of public opinion judge the statements made here this morning because the New Democratic Party has always been the victim of violence and the victim of [a number of] unfair and unjustified conduct,” Lewis said.

The SVG Green Party did not sign the Code, but sent two persons to observe the proceedings.

Adherence to the Code is being overseen by the National Monitoring and Consultative Mechanism (NMCM), which was born out of the 2000 political crisis.