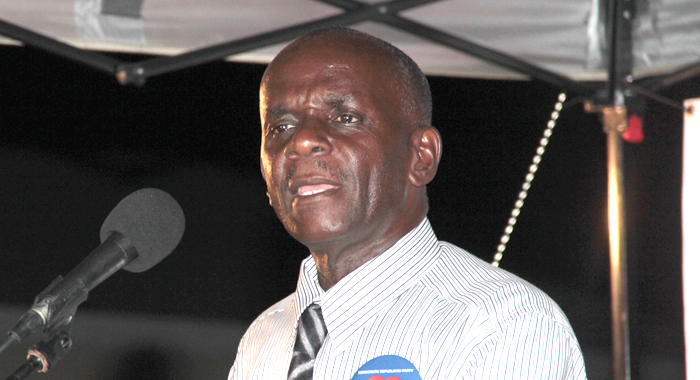 The former head of the Social Welfare Department explained at a rally to launch the party’s candidates and manifesto that the law provides for Public Assistance application forms to be given to applicants, who complete and submit them to the Welfare Department.

The department then would send its staff to assess the person’s situation, then file a report with the head of department then recommend that it goes to Public Assistance Board for approval.

He, however, told the small gathering at Fountain Gap that under the NDP administration, public servants were instructed to give the forms to the NDP Members of Parliament or to the persons appointed by the NDP in constituencies that the party did not represent in Parliament.

“But the NDP got in trouble for disregarding that Act, you know,” Parris said.

The retired public servant said he acted as head of the department for three months, then went on holidays, which was due.

A few weeks into his vacation, he was summoned back to work by the permanent secretary to respond to a query from Director of Finance regarding why one person had gotten seven gallons of paint but “the narrative said the person was indigent and poor”.

“Seven gallons of paint. Not even seven sheets of galvanise and lumber,” he said.

Parris said he provided written and a verbal explanations to the Director of Finance explaining that politicians determined who was eligible for assistance.

He said the Director of Finance ordered that he repaid the more than EC$600 spent on the paint and instructed the Treasury to deduct the money from his salary over time.

The Director of Finance, however, explained that under the law, Parris could appeal the decision, the first-time candidate told the small gathering.

Parris said that he appealed the ruling and it went all the way up to then prime minister, James Mitchell, who ordered that Parris be repaid the money withdrawn from his salary.

“So, it was their bad practice and they suffered for it,” Parris said, adding that he still has at home all the documents related to the episode.

“So the bad practice started under the NDP,” Parris said.

He said that the NDP moved him out of the department because they knew that he supported the incoming ULP administration, for which he almost became a candidate.

The Ralph Gonsalves-led ULP administration, which came to office in March 2001, transferred Parris back to the Social Welfare Department to head the department.

But after two years, he realized nothing had changed and withdrew his support for the ULP administration, Parris said.

“You should not be afraid of people. There is a thing called freedom and everybody wants freedom. so I am happy to be here with the DRP. That’s the freedom party and helping people to make up their minds and realise that nobody should control their minds.”

Parris said that the Gonsalves administration eventually removed him from the department, but added that he doesn’t have time to explain the “sweet story” of how it happened.

Parris, however, said that when Gonsalves sent persons to the department, he (Parris) had to drop whatever he was doing to assist the persons.

The political newcomer said he always knew that prime ministers had a special vote to do a wide range of things.

“But the Prime Minister (Gonsalves) wanted another vote called Social welfare. To do what? You have to answer that yourself,” he said.

Parris said that he stood up in heads of department meetings and spoke against it, noting that his department would lose money if Gonsalves kept part of the budget at the Office of the Prime Minister.

“I opposed it. And people got up around me and said, ‘But Parris, what you have to worry about that if the prime minister decides that he wants it?’

He said he was transferred from the Welfare, sent a year and a half at the Ministry of Education, then was sent to the family Court for two years, at the request of the president of the court.

“I am not sorry that I did all those things, especially now that I am with the DRP and I can proudly speak about standing up for what is right,” he said.

“It is sad that for so many years that particular law has been ignored by the NDP and the ULP and that has us in this particular condition we are in now,” he said, adding that this is a reason why voters should elect the DRP.