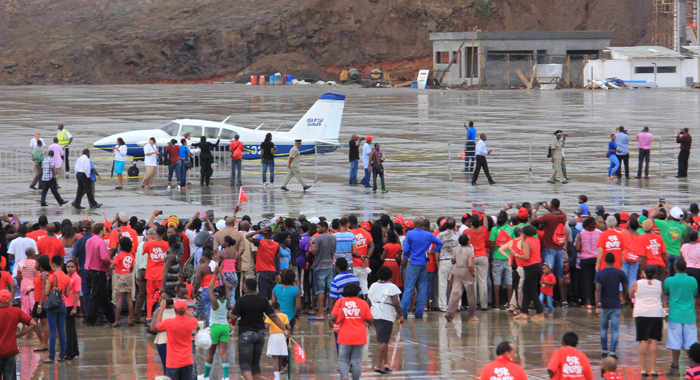 Prime Minister Ralph Gonsalves and ECCAA officials were on the first aircraft to land at Argyle International Airport. (IWN photo)

The Eastern Caribbean Civil Aviation Authority (ECCAA) aircraft that landed at Argyle International Airport on Thursday was for flight checking of the various procedures that have been developed for the approach to and departure from this airport.

Officials conducted the flight checking of one of the visual aids commonly referred to as the PAPI (the Precision Approach Path Indicator system), Donald McPhail, director general of ECCAA, told a ceremony at the airport after the flight landed.

In addition to the ECCAA flight, three other small aircraft, including a 19-seater Grenadine Alliance plane, a Mustique Airways aircraft, and an aircraft belonging to businessman Kelly Glass, landed at the airport, creating history for the project, which has been under construction for almost eight years.

“This system guides airplanes during their approach until touchdown on the runway,” McPhail said of the Precision Approach Path Indicator system.

“And, thirdly, we were here to inspect the runway and suitability for the aircraft used for these flight checks today as well as the other aircraft that landed since,” he said to the crowd, which included many persons decked out in Unity Labour Party campaign t-shirts and waving campaign flags.

McPhail congratulated the government and people of St. Vincent and the Grenadines (SVG) “for the progress that has been made to date in bringing this project, the Argyle International Airport, to reality”.

The EC$729 million airport has missed completion targets annually since 2011 and officials said on Thursday that a few more months are needed to complete the remaining works, which includes the paving of one-third of the 9,000-foot runway.

The civil aviation official explained that the construction of an airport the size of Argyle International is very complex and difficult.

“It is no easy feat,” he said, adding that it includes a great deal of preparatory work.

Preparatory work, McPhail said, includes, in no specific order, a needs assessment that determines that an international airport is needed, a decision taken based on the assessment, a site identification and evaluation, studies such as environmental impact assessment and other studies that inform the actual design.

Then comes the design, followed by the master plan.

The design, when completed would go to the civil aviation authority and, in the case of Argyle, to ECCAA.

He said ECCAA was first engaged in 2007-2008 and since then has received for its approval a number of designs for the various components of the airport as well as variations to some of these designs.

“There were a number of regulatory meetings between the International Airport Development Company and the government of St. Vincent and the Grenadines through the Department of Airports on the one hand and the Eastern Caribbean Civil Aviation Authority on the other,” McPhail said.

He said that the meetings continued at regular intervals during the construction of the airport.

“We have seen, on occasions, the removal of rocks and mountains to achieve the levels required for the runway, the taxiway, the aprons and other facilities of the airport. We are looking at the results of this work today,” he said.

McPhail told the gathering that ECCAA continues to meet with those responsible for the project with the main objective of verification of the compliance with the standards and recommended practices stipulated by the International Civil Aviation organization.

“… our two major concerns or focus are safety and security,” he said.

“So whenever we look at any component of the project, we look at the safety aspects and the security aspect and this is to ensure that any airplane that lands here or departs from here or any user of the airport is in a safe environment as a well as a secure environment.

“I trust that what I have just said helps you to understand a little bit about the Eastern Caribbean Civil Aviation Authority, and I must reiterate my congratulation to the government and people of St. Vincent and the Grenadines, because, this is, by no means, an easy project. And I thank you all for the opportunity to express these few words,” McPhail said.