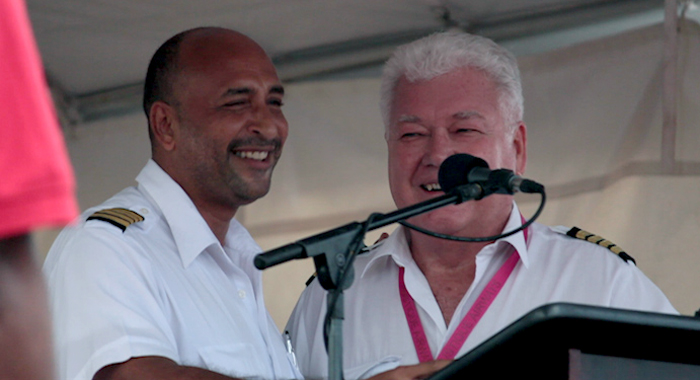 A pilot with 42 years experience who landed one of four airplanes at Argyle International Airport on Thursday said that the landing was “very, very routine”.

“I can only say it’s an honour for me to have landed here today. And it gives me great pleasure to see everyone and — it was just great being able to bring the passengers in and enjoy the landing at Argyle, which was very, very routine for us. There were no surprises and that is what I expected,” Jonathan Palmer told a ceremony on the apron of the incomplete airport.

The Eastern Caribbean Civil Aviation Authority (ECCAA) on Thursday did flight checking of the various procedures that have been developed for the approach to and departure from the airport.

Besides the ECCA aircraft, three other aircraft landed at the airport.

“I have been looking at the approaches for the last four years and it was exactly what I expected. I just say routine. The Prime Minister mentioned ‘walk in the park, ‘a piece of cake?’ We just say routine — as a professional,” Palmer told a ceremony after the aircraft landed.

Joining Palmer at the podium, Everett Best joked, “This guy is not telling you all that he needs to tell,” adding that Palmer is “one of the legends in aviation in St. Vincent and the Grenadines.

“And it’s an honour for me to stand here with him on this occasion, because when I came back from flight school, my first job and my first flight was with this man. So I am honoured.”

He told the gathering that he has never had any doubts about the Argyle International Airport.

“The Prime Minster has always been saying about a cross-wind runway and I sent a message to him and asked him please to desist from using that term because it would never be necessary. And I am confident today that it will not be necessary,” the pilot said.

“We are anxious to get back to make it the normal way of operating,” Best told the gathering.

Government officials said, on Thursday, that the airport will need about two and a half months more to complete, meaning that it will miss the December 2015 deadline, previously the latest annual completion date since 2011.

2 replies on “Landing at Argyle was ‘very routine’ — pilot  ”