Ces McKie tells Belmont residents to ‘peep down’ on progress 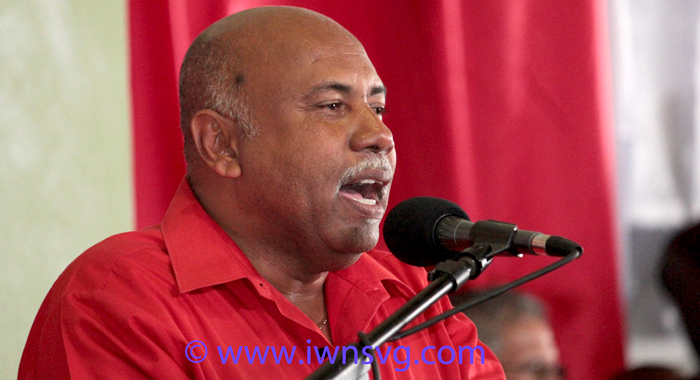 Residents of Belmont and that section of West St. George are ideally positioned to “peep down” on a number of developments in St. Vincent and the Grenadines under the Unity Labour Party, MP for the district, Cecil “Ces” McKie said this week.

“Because of your location, you have been able to identify and assist with a number of development aspects,” he said at a Unity Labour Party rally in the community.

In education, there has been the development of the five primary schools in the constituency, said McKie, who is seeking a second term in office amidst a challenge from the main opposition New Democratic Party’s Julian “Jules” Ferdinand.

McKie said that when the ULP came to office in 2001, they met a system where no catering was done for pre-schoolers.

“This government has provided assistance for all of the preschools throughout St. Vincent and the Grenadines.”

He said the ULP has gone further, ensuring that all pre-schools are of a particular standard so that they can provide the platform and foundation for the young children of SVG.

“We have attached pre-schools to some of the primary schools to make it easier for you, the parents, to send your children to preschool.”

At the Belmont Government School, there is a 65 per cent pass rate and all the students have laptops, McKie said, and exclaimed, “What a government and what a reflection of love!”

He noted that there was no secondary school in the constituency 10 years ago.

“Now, we have the largest, we have the best secondary school anywhere across the length and breadth of St. Vincent and the Grenadines,” he said of West St. George Secondary school, adding that the school consistently turns out a pass rate in excess of 60 per cent.

He spoke of the Integrated Community College and its more than 2,500 students and the two medical colleges located in the constituency, which have 600, including residents of West St. George.

“What love, what progress, and what development,” McKie said.

He said that 16 years ago there were very few qualified teachers in primary schools.

“Now, we have multiplied that several fold and we have several qualified teachers across primary and secondary schools and that is why the levels we are turning out, in terms of the examinations, are much higher than they were 16 years ago.”

He said the Doris McKie Learning Resource Centre, located in West St. George, is the most active in the country with programmes daily.

Persons who didn’t get a “second chance” to get an education now have that opportunity and are grabbing it with both hands, McKie said.

Residents of Belmont have seen the cruise ship coming into Kingstown and on a clear day, they can see the yachts sailing to the Grenadines, said McKie, who is Minister of Tourism.

“In other words, you are seeing tourism grow and develop.”

“In other words, we are going to increase the number of visitors to this destination. We want some of that action up here in Belmont.”

He said Belmont is a preferred look-out location for visitors.

Over the next five years, the ULP wants to ensure that it caters for the craft people who operate in the area, as well as those involved in food preparation and sale, and entertainers.

“So over the next five years, we are going to be working to establish the necessary booths here… We must utilise those opportunities so that when the visitors come to this site, they will have more to do and more of our culture to experience.”

McKie said he has discussed with ULP candidate for Marriaqua, St. Clair Jimmy Prince, the installation of a tourism trail at the Belmont school that will take persons from Airy Hill to Jack Hill.

He said that bananas have certain challenges and farmers must diversify around the crop. Some farmers have gotten into root crop production and SVG is a major provider of root crops to the region.

Officials have engaged farmers about forming cooperatives so that they can produce more and position themselves for when Argyle Airport becomes operational, McKie told party supporters.

“Over the next five-year term, that will be amplified and taken forward in an aggressive way. Farmers, look out for that discussion very early in the new year as we position ourselves to be an even greater producer of agricultural produce and livestock, which we are now shipping to Grenada and other Caribbean territories want to get our livestock as well.

“For the next five years, we also have a plan for this constituency and for St. Vincent and the Grenadines. Are we going to give that opportunity for the guys on the other side to roll back the progress and development we have made, to roll back this country light years back from where we have come or are we going to stick with the Unity Labour Party?

“What opportunity will lie there for you, the residents of Fairbairn, West St. George, East St. George and Marriaqua! You will have an entertainment centre down there,” he said adding that there will also be theatres and other entertainment hubs.

“I peep down, as a resident of Belmont and I see down there in the valley the establishment of an indoor facility. I also see the development of a boardwalk and entertainment strip. I peep down and I also see the development of commercial activity, which will cater for job opportunities again for you, the people of Belmont, and the people of St. Vincent and the Grenadines.”

McKie noted that voters will have an opportunity on Dec. 9 to determine the destiny of St. Vincent and the Grenadines.

“You will have that opportunity to look at the slate of candidates that are being offered. You will have the opportunity to look at the leaders that are being offered: Comrade Ralph Gonsalves against the other guy — Arnhim Eustace. And you will no doubt agree that the slate of candidates and the leader are far superior to what the guys on the other side are offering. And therefore, you will have no doubt, I am sure, to endorse the candidates,” McKie said, adding that the ULP will win all the seats in St. Vincent and also want the two in the Grenadines.

“… I want you to come out and support your representative and ensure that Ces will still be the best for west, but, more so that the Unity labour Party is returned in a resounding way with a greater majority so that we can continue to progress this blessed nation of ours, St. Vincent and the Grenadines,” he said.