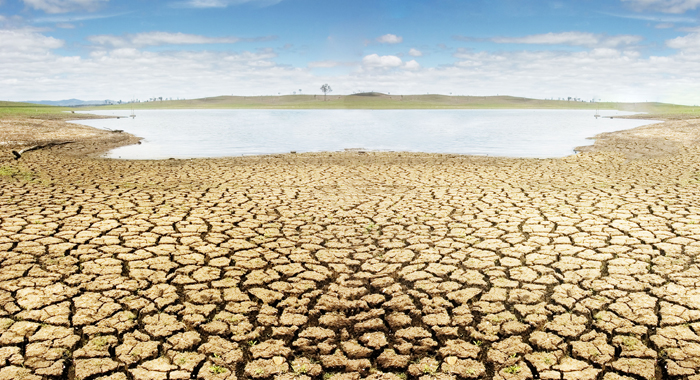 BASSETERRE, St. Kitts — Caribbean countries from the Leeward Islands south to the Guianas can expect below average rainfall from December to February, regional forecasters said on Thursday as the Caribbean Climate Outlook Forum (CariCOF) got underway here.

“The majority of the region will be under a drought watch. This includes from the Leewards right down to Trinidad,” Elmo Burke, senior meteorological officer, at St. Kitts Air & Sea Ports Authority told the two-day conference, which looks at the prediction for the upcoming dry season.

“So, they are going to have to take some extreme measures to mitigate and prepare for this drought up to May 2016,” Burke said, but said that Caribbean countries west of Puerto Rico, including Belize, can expect above normal rainfall

He outlined to the audience, composed mainly of forecasters, water resource managers and agriculture stakeholders, the steps that can be taken to combat the situation.

“Water services need to continue, to implement drought management plans and intensify that, because [from] what we are realising, the bulk of the region will be experiencing some kind of drought … warning, or emergency, in the case of Puerto Rico,” he told the event, which is organised by the Caribbean Institute for Meteorology and Hydrology (CIMH).

“Our water services across the region have to continue to monitor their reservoirs as well as the ground water levels,” Burke said.

He further told the biannual conference that forecasters are recommending that water authorities continue to sensitise the public about the drought situation across the region.

Burke also recommended that water resource managers continue to sensitise their publics about water wastage laws and their penalties.

Adrian Trotman, agrometeorologist at CMIH, told the conference that El Niño Southern Oscillation (ENSO) has some significant potential for the regional.

He said the region has already been experiencing the impact of El Nino from early this year, in the form of reduced rainfall and its implications, particularly low water availability.

ENSO is an irregularly periodical climate change caused by variations in sea surface temperatures over the tropical eastern Pacific Ocean, affecting much of the tropics and subtropics.

“We also suggested back then that there was the likelihood of an early end to the wet season. We are approaching that end.

“So we have a wet season,[which] though when it started yielded less than we are accustomed to, less than we expect, following on the second half of a dry season which was really dry. And, oh my goodness, what do we say we are entering again? We are entering the dry season,” Trotman said.

Regional forecasters and other officials say that the uncharacteristic weather being experienced across the region results from climate change.

“Climate change is real. It is here to stay and it is not going away. Climate variability is also creating a bit of a havoc on some of the island states,” he said mentioning the drought in the region,” said Lester Arnold, coordinator of the Reducing Risks to Human and Natural Assets Resulting from Climate Change (RRACC) Project at the Organisation of Eastern Caribbean States (OECS) Commission.

“This is the second time in the history of Potworks Dam in Antigua that it has gone dry. We’ve also seen the highest temperatures on record for the last 50 years. So, therefore, we can say that climate variability is causing some trouble,” Arnold said.

He said the RRACC Project will hold three workshops in three OECS countries, including Antigua and St. Kitts, which he said are among the most water-stressed countries in the world.

The RRACC Project has erected hydro met stations at some OECS states and recently begun the installation of early flood warning systems in Nevis.

Arnold, however, said that some of this equipment are being vandalised.

“I think all of us need to play a part in preaching the message that these stations are for the good of all populations of the member states. Without these pieces of instruments, we will not be able to gather the information and warn persons of an impending flood. So, we need to revisit the way we educate persons to bring the message across that vandalism of these stations will not be tolerated.”

He, however, said that some members of the public believe that the pieces of equipment are for surveillance activities, hence the negative reaction to them.

“We have heard it in some areas, the guys will say ‘Well, you all are coming to spy on us.’ And we all know the reason, which I am not going to get into now,” Arnold said, adding, “but we need to revisit how we communicate about the protection of these equipment.”