Youth rally was a success despite Fya Empress fiasco — NDP 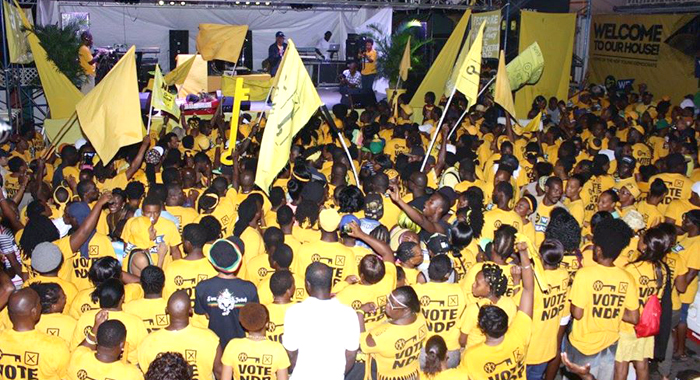 Eustace has been credited for reviving the NDP into a credible political force in St. Vincent and the Grenadines (Photo: NDP/Facebook)

Nick Francis, president of the Young Democrats, the youth arm of the New Democratic Party (NDP), says the party’s youth rally on Saturday was a success despite the decision of guest artiste, Lornette “Fya Empress” Nedd, not to perform.

The NDP paid to bring the Tobago-based artiste to St. Vincent on Wednesday and she rehearsed with the band one day later, but pulled out one day before the show, citing family reasons.

“I am not in the frame of mind to be hating on Fya Empress. She was given a choice and she made her decision. At the end of the day, our youth rally was a success and we wish Fya Empress all the best in her future endeavours,” Francis told I-Witness News on Monday.

The NDP said on Facebook Saturday evening that the artiste pulled out “after her family had come under pressure and threats of victimisation by the DYING regime of Ralph Gonsalves”.

Asked to comment on the fact that the artiste went to a Unity Labour Party rally to respond to the NDP’s post, Francis said:

“Fya Empress is a free individual. She can chose to go on whichever platform she wants to go on. We are not in the business of condemning people. We live in a free society and she is free to do as she pleases, as any ordinary Vincentian.”

Francis said that what took place is “unfortunate”, adding, “but at the end of the day, the youth rally was a success and we are glad that Kevin Lyttle agreed to perform and maintained his position to perform for the New Democratic Party. And we were thrilled to have him there.

“At the end of the day, the rally was a success. The message of the New Democratic Party was well-delivered to the young people who were gathered there in Barrouallie and it is unfortunate the decision that Fya Empress made, but, at the end of the day, it is her decision to make, and we wish her all the best in her future endeavours,” Francis said.