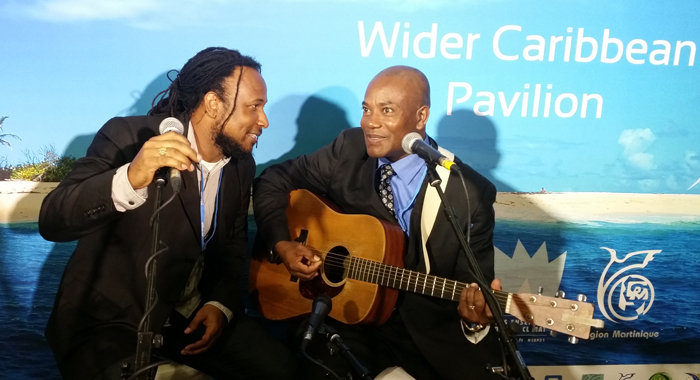 Singers Aaron Silk of Jamaica, left, and Adrian Martinez of Belize perform at the Caribbean Pavilion at the United Nations Climate Talks on Monday. (Photo: Panos)

PARIS — Caribbean singers and songwriters Adrian Martinez of Belize and Jamaican Aaron Silk delivered a riveting performance Monday, as negotiations aimed at agreeing a legally-binding climate accord moved into the second and final week.

Among other thing, the performance helped to project the Caribbean’s message “1.5 To Stay Alive” while urging collective action from world leaders, in the interest of the planet.

They also provided attendees to the negotiators — many of whom witness their performance at the Caribbean Pavilion — with a taste of one of the many things the Caribbean offers to the world: its music.

“I have always been a fan of the earth, a lover of the earth; and anything to do with nature, I wanted to be a part of it. Seeing what is happening now with this climate change and this rising of temperatures that has been happening, I had to get involved,” said Silk, a self-styled advocate for reggae music and the use of reggae to spread climate messages.

“I myself have been affected. I have had to be carrying pans with water to do stuff like take a shower [because of the recent drought in Jamaica]. I see exactly where this climate change is heading so we have to take control of it and that is why I am here: to play my part,” the reggae act added.

Martinez, known in entertainment circles as “The Doc”, said he was honoured to support his region in the effort to secure its interests at the talks.

“I am honoured to be here representing the Caribbean, but specifically my country. I believe this is so important. It is a spotlight that will hopefully open more doors for musicians in Belize,” noted the man, who has been in the music business for a quarter of a century.

To other musicians within the Caribbean diaspora, he said: “Climate change is something that we need to take seriously and it is something that we need to start sharing with people in terms of lyrics. The music is powerful. Through the Caribbean, the different genres are powerful,” added Martinez, a former member of the Garifuna Collective and current performer of karanga music.

The two are performing in Paris under the “1.5 To Stay Alive” campaign designed to bolster Caribbean negotiating positions at the talks, which are expected to yield a new agreement on climate change.

Those positions include a move to realize a 1.5 degrees Celsius target as a cap in global temperature increases, given the climate impacts that Caribbean islands face — from increased warming to sea level rise and more extreme weather events.

It is the effort of the Caribbean Community Climate Change Centre, Panos Caribbean, the Organisation of Eastern Caribbean States, the Caribbean Development Bank, and the Regional Council of Martinique.

There is also a theme song — called “1.5 To Stay Alive” — produced under the campaign, in addition to a variety of other creative endeavours — including a painting by Jonathan Gladding.

There is also an ongoing selfie video challenge, which urges Caribbean people to, using their smart phones, chronicle and share via social media why the 1.5 degrees Celsius target is important to them.