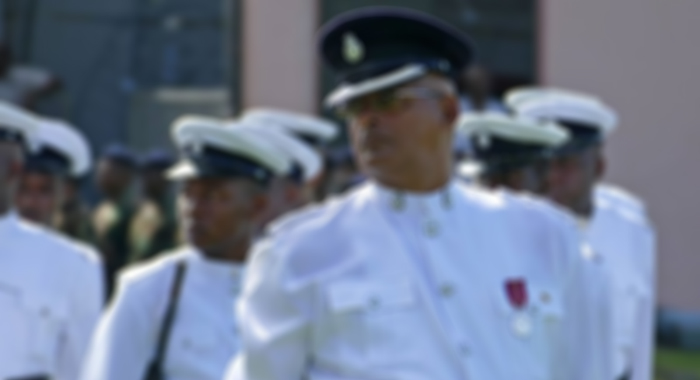 The main opposition New Democratic Party on Tuesday said it was concerned about certain developments within the Police Force one day before Vincentians elect a new government.

A number of promotions will be announced on Wednesday, election day and 54 recruits, including 12 to be assigned to the Coast Guard, were selected during the lead up to the polls.

Opposition spokesperson on national security matters, MP for Central Kingstown, St. Clair Leacock, said his party was concerned about the promotions and how recruits were chosen.

“As we understand it, these vacancies do exist. We also know that there were others long in the line before these current recruits,” Leacock said on the NDP’s daily radio programme.

He told listeners that other persons wishing to become police officers had done medicals and had gone through the interview processes and “should have been way ahead of those who have been recruited.

He said there is every indication that the trainee police officers “have been recruited to the Force in not dissimilar fashion to which we have dished out lumber, cement, galvanise, manure and pigs in St. Vincent and the Grenadines,” he said.

“In other words, the have literally been recruited in exchange for political votes, political patronage at the polls,” Leacock said.

He said it is “unfortunate” and “regrettable” that the country “has descended to that, that even the recruitment to the Police Force now becomes a political exercise of a nature.

“It’s all about winning an election. This is indeed a low, low,” said Leacock, a former commander of the Auxiliary Police Force.

He said the timing of the promotions of the police officers has been timed “such that the people will be occupied in the heat of the elections and that it may be too late for people to respond to these promotion”.

The NDP, he said, understands that many of these promotions have not found favour within the police hierarchy.

“In fact, for those that are under the remit of the Commissioner of Police, we can say without question that the police high command now exercises little authority over the Force itself and that this is directed straight by the ‘Honourable Prime Minister’ …, Sir Vincent Beache — as advisor to the Police Force, and the Permanent Secretary.

“In fact, all of the recruits were selected by those three names individuals.”

Leacock said there has been a spate of transfers over the last few months and weeks “unprecedented in the history of the Police Force, all to put out to pasture people who are perceived to be favourable to the New Democratic Party.”

He said that a number of police officer, larger than normal, have reported ill, “but it will not, as we understand it, affect the rostering of policemen for tomorrow (election day).

“It is clear, therefore, on the basis of the information we have, that we will have to arrest this situation soonest, because we cannot allow this degradation and this decay in the Police Force in St. Vincent and the Grenadines.

“We have seen manifest evidence of this all along the political route,” Leacock said.

He said the NDP has spoken about this before, and mentioned the police chief having attended ULP rallies in the party’s colours and displayed its campaign hand symbols.

Prime Minister Ralph Gonsalves, Gonsalves, who is Minister of National Security, has said that it was wrong for the top cop to do so.

Leacock spoke of the “unchecked” conduct of senior police officers, “including Superintendent of Police Richard Browne, who has been vicious on Facebook in his assault on the leader of our party and our party, and a number of officers, who have been given a virtual green light, or, maybe we may want to say in this context, red light, to behave in most unprofessional of ways.”

I-Witness News was reliably informed some time ago that the police chief has reprimanded Browne for what the police hierarchy saw as inappropriate conduct on social media for a senior cop regarding partisan politics.

Leacock said: “The New Democratic Party will not allow these developments to hinder its forward march to victory. And if we can state and use the current language of the day, we will in fact press gas as we approach victory on election day,” he said, using an NDP campaign rallying call that has become popular over the last week or so.

“We have been made to feel that if the decision is a very close one, that certain members of the high command will not blink to keep an unrepentant administration in office, but we have the assurance that good sense will prevail.”

Leacock said that the NDP has spoken to friendly governments and the region as a whole “on what can be the outcome.

“We will leave no stones unturned to ensure that on the night of the election, the victory that we have won at the polls and the democratic will of the people is not suppress and is not denied.

“Therefore, all those who are going to the polls tomorrow can do so freely and fairly and with great degree of confidence that they have coming into office a regime that will be able to protect them and take care of the affairs of St. Vincent and the Grenadines and that good order will prevail and that there must be no apprehension about going to the polls and voting solidly for the New Democratic Party.

“Goodness, decency and good over evil will always prevail. Your new Democratic Party, your great institutions can give you that assurance. We will, in the fullness of time, address the attended problems that we have identified to be rotten within the constabulary at this time,” Leacock said.

But Commissioner of Police Michael Charles told I-Witness News Tuesday evening that he was not sure what the opposition MP was talking about.

He said the new recruits were chosen using the established process in the Police Force.

Charles confirmed I-Witness News that a number of promotions in the Police Force will be announced on election day.

He said there was no special reason why the announcement would be made on election day and said he was not aware that members of the police high commands were displeased with the promotions, since they were involved in making the decisions.

The police chief said that the nation can be assured that police officers will uphold their sworn duty to preserve peace and stability in St. Vincent and the Grenadines without partisan consideration regardless of the outcome of tomorrow’s vote.

He was he was not aware that a higher number of officers than normal had reported ill.