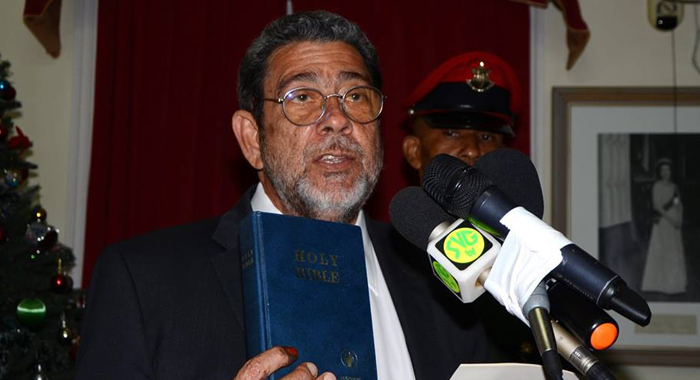 Dr. Ralph Gonsalves takes the oath of office as Prime Minister of St. Vincent and the Grenadines for a fourth consecutive term. (Photo: Lance Neverson/Facebook)

KINGSTOWN, St. Vincent (CMC) — Ralph Gonsalves was Thursday sworn into office as prime minister for a fourth consecutive time on a day in which the main opposition New Democratic Party (NDP) refused to concede defeat in the general election and their supports sought to prevent the ceremony taking place.

“I am sorry I am late,” a beaming Gonsalves, 69, told the audience at the official residence of Governor General Sir Frederick Ballantyne Thursday night, adding, “Some people just don’t want to accept the results of the election”.

Gonsalves led his Unity Labour Party (ULP) to a fourth consecutive term, winning eight of the 15 seats at stake in Wednesday’s general elections, a carbon copy of the 2010 results.

Gonsalves, who was sworn in along with his deputy prime minister, Sir Louis Straker and the Attorney General, Judith Jones-Morgan, later told the Caribbean Media Corporation (CMC) that while he had anticipated a recount in the North Leeward seats where the NDP candidate won by a mere six votes, he did not expect the opposition to seek a recount in Central Leeward where Sir Louis defeated the NDP candidate Benjamin Exeter by 314 votes.

“So it is absolutely ridiculous,” he said, noting, however, he was more disappointed at the fact that a radio announcer, whom the police has since detained, spoke of “ballot boxes stolen, this or that wrong with the process … and calling on people to come out and go down Central leeward.

“Excited people’s passion, it is entirely illegal and reckless and, in fact, criminal,” he said, adding that the law enforcement authorities “will determine whether or not the statement had an intent of sedition”.

Gonsalves, who is expected to name his Cabinet over the weekend, told the ceremony that while he intends to be the prime minister “for the whole of St. Vincent and the Grenadines” he also takes “very seriously,” the responsibility of law and order in the country.

“I am sorry but some people just do not want to accept the results of a free and fair election,” he added.

He said the election results showed that “there should be no change of government” and that he intends to carry out his full term of five years.

“I have been elected to serve five years and I will serve five years unless the people in some national conversation say, ‘Ralph we are persuading you not to go for five years.’ But part of my obligation, my political obligation in this period is to manage the transition to the next generation of leaders”.

Gonsalves described his victory at the polls as being tantamount to people trying to climb Mount Everest, the highest peak in the world.

“It’s the political equivalent of scaling Mount Everest, many men have tried to reach the top, but very few have attained it,” he added.

Earlier, riot police were called out to the official residence of the Governor General as NDP supporters vowed to prevent Gonsalves from being sworn in as prime minister.

The supporters claimed that the elections on Wednesday had been rigged in favour of the ULP, forcing the ceremony that had been scheduled to start at 2 p.m. to take place some five hours later.

An NDP official had informed the crowd that the party had been given an assurance by Sir Frederick that there would be no swearing-in ceremony until the outcome of the results in the contested seats that were declared on Wednesday night.

But despite the assurance the crowd, shouting “we won the elections”, “we will not be moved,” and locking arms became engaged in a scuffle with the riot police.

On Thursday, the NDP leader told reporters he had asked the Governor General not to swear in the 69-year-old Gonsalves.

Eustace, 70, told reporters that the NDP “would never accept the results of the elections.

“As I mentioned before there are irregularities, there are ballot boxes that are not sealed both here and in North Leeward and we are not conceding, we are not accepting the results.

“We are standing firm [and] until we get a very clear picture, he (Gonsalves) should not be sworn in today because the results of the elections are not final,” he told reporters.

The NDP supporters, clad in their yellow jerseys, claimed that several ballot boxes were missing and were demanding that either the Electoral Office do over the poll in that constituency or announce that Exeter had won the election.

At one stage, there was a close confrontation between Sir Louis and Eustace with the police having to intervene to keep the two veteran politicians apart.

Sir Louis had criticised the decision of Eustace to bring supporters to the police station where the recount was taking place, but Eustace insisted that he was right since the ruling party had conspired to cheat the population of its victory.

7 replies on “Gonsalves & Straker sworn in as PM, deputy”