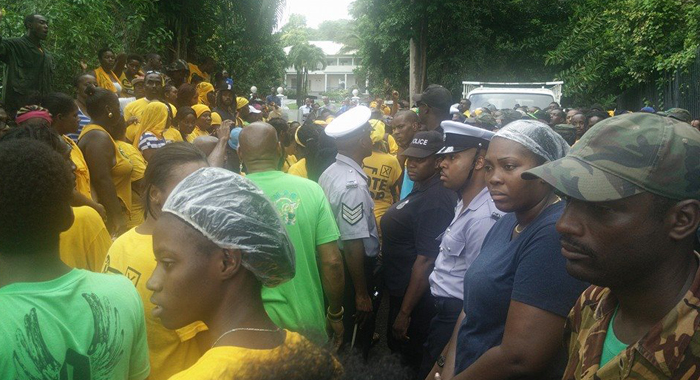 Scores of opposition supporters on Thursday demonstrated along the road to Government House, the official residence of the Governor General, and prevented the swearing in of Ralph Gonsalves to a fourth term as prime minister, one day after his Unity Labour Party (ULP) won the general elections by a single seat, according to preliminary figures.

The protest comes amidst claims by the main opposition New Democratic Party (NDP) that it won the Central Leeward seat by six votes, and, therefore, is the duly elected government of St. Vincent and the Grenadines.

Electoral officials have placed Central Leeward in the ULP column, saying the party won that district by 318 votes.

The swearing-in of Gonsalves, and Judith Jones-Morgan, who has been named Attorney General-designate, was scheduled to take place at 2 p.m. Thursday.

The ceremonies have been postponed amidst recounts in Central Leeward, and North Leeward, where preliminary figures show the NDP’s Roland “Patel” Matthews retained the seats by seven votes against the NDP’s Carlos James, a first-time candidate.

Sources say that Governor General Sir Frederick Ballantyne has said that he will only conduct the swearing in ceremony after all recounts are completed.

NDP leader Arnhim Eustace told reporters on Thursday that his party “would never accept the results of the elections.

Eustace was in the Central Leeward town of Layou on Thursday where a re-count was taking place at the police station.

He maintained that the NDP’s candidate, Benjamin Exeter, had won the poll.

“As I mentioned before there are irregularities, there are ballot boxes that are not sealed both here and in North Leeward and we are not conceding, we are not accepting the results.

“We are standing firm [and] until we get a very clear picture, he (Gonsalves) should not be sworn in today because the results of the elections are not final,” he told reporters.

At one stage, there was a close confrontation between the ULP’s candidate, Louis Straker, and Eustace with the police having to intervene to keep the two veteran politicians apart.

Straker had criticised the decision of Eustace to bring supporters to the police station where the re-counting is taking place, but Eustace insisted that he was right since the ruling party had conspired to cheat the population of its victory.