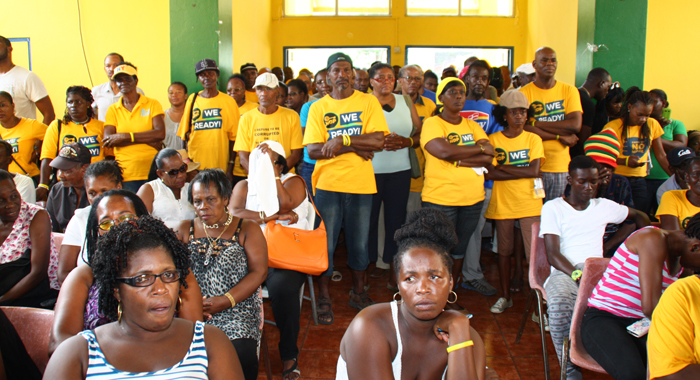 NDP supporters at the party’s event on Saturday. (IWN photo)

The seven New Democratic Party (NDP) candidates who were successful in Wednesday’s general elections will not take up their position in Parliament.

Party leader Arnhim Eustace, who was elected to a fifth consecutive term as MP for East Kingstown, made the announcement Saturday.

He restated the NDP’s claims of voter irregularities in Central Leeward, which, he said, “point to the need for us to stand firm and not to accept the results of the election”.

The NDP says it won Central Leeward and is, therefore, the legitimate government of St. Vincent and the Grenadines.

The NDP says it is not accepting the results of the elections, which electoral officials say the Unity Labour Party (ULP) won 8 seats to the NDP’s seven, a carbon copy of the 2010 results.

“… we would not be sworn in to office, neither will we go to Parliament until this matter is resolved,” said Eustace, who also announced that the NDP will take legal action in the matters.

“To go to Parliament will be to concede and we are not conceding,” he said.

Eustace said that the NDP has proof that 320 persons who were not entitled to, cast ballots in Central Leeward.

Asked how this was possible when all parties have agents at the polling stations, Eustace said:

Eustace had earlier indicated that he would not divulge certain information for legal and security reasons.

Asked why the NDP candidates who have been declared winners would not take up their posts, Eustace said:

“My answer to that is, we want to change the government.”

I-Witness News further asked Eustace how he would respond to a statement that the NDP had a chance in the election to change the government, but failed and is, therefore, resorting to non-election methods.

As the question was being asked, some NDP supporters jeered and Executive Editor of I-Witness News, Kenton Chance, said to Eustace: “Well, maybe the NDP could decide whether or not they are inviting journalists to ask questions. If not, we can all pack up and leave — or I will pack up and leave.”

Eustace responded: “Mr. Chance, I said at the beginning, there are things I would not answer, for reasons. And if you want to leave, you can leave.”

His party supporters responded with cheers.

The response of NDP supporters at Saturday’s event was not unlike the treatment dished out to I-Witness News by ULP supporters at their campaign events this election season.

The Cabinet is expected to be sworn in in Kingstown on Monday.