Eustace trying to fend off a leadership challenge — Gonsalves 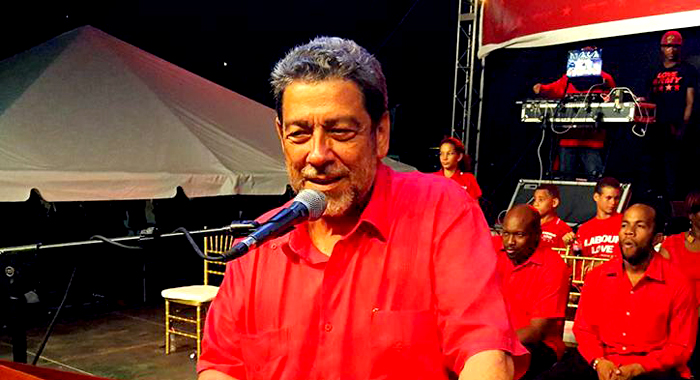 Prime Minister Ralph Gonsalves says that the claims by New Democratic Party (NDP) president Arnhim Eustace that Wednesday’s elections were “stolen” are intended to stave off a leadership challenge.

The NDP has rejected the results of the elections, which officials say Gonsalves’ Unity Labour Party (ULP) won by a single seat, a repeat of the 2010 results.

But Eustace, citing irregularities, said that his party will challenge the results in court, starting Monday.

Based on Wednesday’s results, the 70-year-old politician has now led the party to its fourth consecutive defeat, the first of which came in March 2011, six months after he took over from James Mitchell as party leader and Prime Minister.

Sir James was in office for about 17 years.

But Gonsalves told ULP supporters Saturday night that Eustace’s post-election statements are meant to protect his job as Leader of the Opposition.

“You want to tell me a man lose one, two elections, he lose a third and didn’t offer his resignation? He lose a fourth and the night, he deluded himself, fooling himself, fooling other people that he win, that the win election” Gonsalves said.

“All that Eustace is going on, Eustace is trying to keep anybody from challenging him. He did the same thing in 2010 inside of the party. That is his tactic. All of this is to keep his job and to get the salary as Leader of the Opposition. That is all, because he got the salary of a senior minister and we give him about 180,000 a year to run his office.

“So, is a cosy job; is the easiest job in the country. Yo’ make of it what yo’ make of it. Yo’ go on radio Monday morning and yo’ talk a lot of foolishness. And yo go home and doh-do (sleep) and you wait ‘til next week Monday morning again,” Gonsalves said.