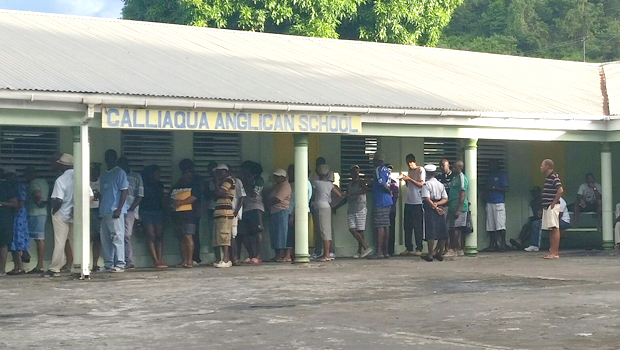 The Commonwealth Election Observer Team commends the people of St Vincent and the Grenadines for the peaceful and orderly manner in which they exercised their franchise on 9 December. We call on all citizens of St Vincent and the Grenadines to sustain the positive spirit of peace and commitment to democratic values that characterised Election Day.

We have met with all major stakeholders including the Supervisor of Elections, representatives of all political parties, civil society organisations, church leaders, the media, the Royal St Vincent and the Grenadines Police Force as well as national and international observers.

The Team observed voting in the 13 constituencies on the mainland. The following is an interim statement outlining our key observations of the election process and the electoral environment.

We witnessed the conclusions of the main rallies that were held after our arrival. We observed that these rallies were peaceful, vibrant and engaging. The fundamental rights of candidates, political parties and supporters to assemble and campaign were broadly observed. However, in our briefings, attention was drawn to the lack of regulation on campaign finance and the absence of legislation surrounding the registration of political parties.

The Team believes that the 15-day special voter registration period does not allow adequate time for political parties, voters and concerned stakeholders to scrutinise the voters’ list, and make objections and appeals.

We note with concern the low percentage of women candidates in the elections.  The Team observed that advocacy efforts to progress issues surrounding women’s political leadership face a number of challenges in St Vincent and the Grenadines, primarily due to cultural barriers. We urge political parties to demonstrate visionary leadership on this issue, and to review their selection processes to significantly increase the number of women in representational politics and in positions of party leadership and decision-making.

The poll was inclusive and benefitted from a seventy-three percent voter turnout. We noted that political party agents were present at most polling stations, although not all parties were represented. Recognising the current political context, the Team is of the view that this helped to foster an environment of transparency at polling stations.

At stations observed by the Team, polls opened and closed at the prescribed time. The closing and preliminary vote-counting at the polling stations appeared in line with established protocols and were conducted in a transparent manner by polling officials. We would however encourage political parties to ensure that their party agents are present throughout the entire tabulation process up until the final count conducted by returning officers the next day. In this regard, it may also be helpful for relevant stakeholders in St Vincent and the Grenadines to initiate a meaningful conversation on the utility of having the second and final count conducted the following day.

We strongly urge more clarity in the law, around the formal announcement of election results to the voting public in relation to the official formation of a new government which has secured the majority of seats.

We commend the Supervisor of Elections for the manner in which she has carried out her duties and steered the process to successfully administer the General Election on 9 December. The Team nevertheless believes that the time has come for St Vincent and the Grenadines to deepen its democracy by establishing an independent election management body, in order to increase voter confidence. If requested, we urge the Commonwealth Secretariat to support stakeholders in St Vincent and the Grenadines in the establishment of such a body.

Based on our observation and exchanges with a broad range of stakeholders since our arrival, our preliminary conclusion is that the elections were generally peaceful and relatively well conducted. The shortfalls observed to date by members of the Team are not significant enough to put in question the credibility of the outcome.

As of today 12 December 2015, we have heard allegations of serious irregularities from one political party. We call upon those making these claims to file formal complaints as prescribed in the electoral laws, and for the relevant institutions to investigate and pronounce on these allegations.

In our Final Report, we will reflect on possible areas for improvement. This report will be submitted in due course to the Secretary-General of the Commonwealth who will subsequently share it with relevant stakeholders before it is made public.

The Commonwealth Election Observer Team was constituted at the invitation of the Government of St. Vincent and the Grenadines.