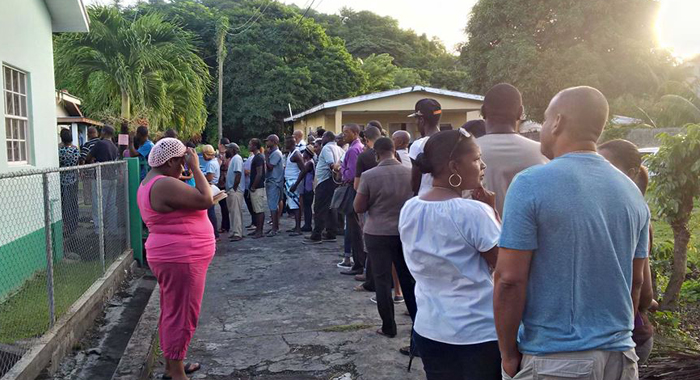 Having observed the traditional peaceful processes that culminated in the general elections, I want to particularly compliment the people of Saint Vincent and the Grenadines on the civic mindedness exhibited on December 9th. In that same vein, I would urge that the established electoral procedures be utilized to address any differences or disputes that may arise.

The Electoral Observation Mission of the Organization of American States (EOM/OAS) deployed to the December 9, 2015 General Elections in St. Vincent and the Grenadines congratulates the people of the country on the high degree of civic spirit exhibited in a peaceful and successful election day.

The OAS Observer Mission fielded 13 observers from 10 countries, and was headed by Ambassador Jacinth Henry-Martin.  The team observed electoral processes in 14 of the 15 constituencies, visiting 173 of the 232 or 74 % of the polling sites in the country. Observers witnessed the on time opening of all monitored polling stations, and noted the availability of requisite materials and the presence of polling officials. In the morning, there were long lines of voters who patiently waited to exercise their franchise.

The presiding officers, poll clerks, party agents and police worked harmoniously throughout the long day, helping citizens to find their polling stations and ensuring an organized and peaceful environment. Officials conducted the preliminary count, which was concluded in large measure within two hours of the closure of the polls.

The EOM/OAS notes the significant preparations made by the Electoral Authorities in St. Vincent and the Grenadines ahead of the election to develop procedures and systems that benefited the electoral process.

This preliminary statement is based on direct observations of the OAS team and meetings held with electoral authorities, government officials, political parties, media, civil society organizations and religious bodies, among other stakeholders and interlocutors.

The OAS Mission welcomes the continued high level of participation by women in most areas of the political process, but noted that a mere 7 of the 43 candidates (some 16.28%) were women, the majority of whom were nominated by the two smaller parties.  The EOM/OAS recommends that efforts be made by all political parties, civil society and government to promote the participation of women in electoral competition.  Specifically, the Mission recommends that consideration be given to developing legal mechanisms that ensure women are incorporated on the ballot, promote training programs for women leaders and strengthen civil society organizations working to promote women’s civil and political rights.

The Mission commends the enthusiastic involvement of youth in the campaign, particularly on social media, and in respect of their consideration of the issues, as well as the noteworthy participation of several younger candidates in the electoral competition. In this context, it recommends that political parties and government continue to encourage youth political participation at all levels of the process, providing training programs for young political leaders and opportunities to apply their leadership skills.

The EOM/OAS heard complaints regarding the integrity of the voter´s lists, specifically the higher than average number of transfers in competitive constituencies, and concerns raised in respect of the 15 -day special registration period following the announcement of the elections. The Mission noted recent efforts by the Electoral Department to purge and update the list of voters. It also encourages the Electoral Authorities to implement a continuous updating and cleansing process of the Voters List and further recommends that it includes the photograph of each citizen, so that the identification process is easy and immediate.

Reference was regularly made to the inadequacy of voter education for these elections via the usual media channels.  This resulted in reliance on political parties for basic information on the voting processes.  The OAS/EOM recommends that the authorities pursue a more active and focused voter education program in the months leading up to the election.

The Mission highlights the use of technology for assisting with the determination of the location of polling stations for individual voters to exercise their franchise.

Since the 2010 election the OAS has recommended campaign finance regulation, which will lead to a more equitable and transparent political contest. During this electoral process, the Mission heard complaints about the use of public resources during the campaign. Smaller political parties felt discriminated against due to the fact that only political parties with representation in the Parliament could import campaign materials on a duty free basis.

The Mission commends the electorate and the authorities for the calm that prevailed throughout the pre-electoral period, notwithstanding the intensity and strong rhetoric noted during the campaign. The Mission notes and commends the political parties for signing a Code of Conduct for the St. Vincent and the Grenadines General Elections that was advanced by the National Monitoring and Consultative Council. It recommends however that such a code be signed at an earlier stage of the campaign by all parties to ensure a clean and peaceful campaign period.

Concerns were expressed that the post of Supervisor of Elections, while created by constitutional mandate, is a dependency of the Office of the Prime Minister.  It was cited that such dependency could lead to perceptions regarding a lack of autonomy and independence.  The Mission recommends that consideration be given to the establishment of an Independent Electoral Management Body.

Chief of Mission Henry-Martin will deliver an oral report to the OAS Permanent Council in early 2016. The report will be public and include additional observations and recommendations to those outlined here today. The OAS mission wishes to express its thanks to the Government of St. Vincent and the Grenadines and to the Electoral Department for the facilitation of information across the board during the mission’s stay in the country. In addition, the mission thanks the governments Argentina, South Korea, Spain and the United States for their contributions that made this electoral observation mission possible.