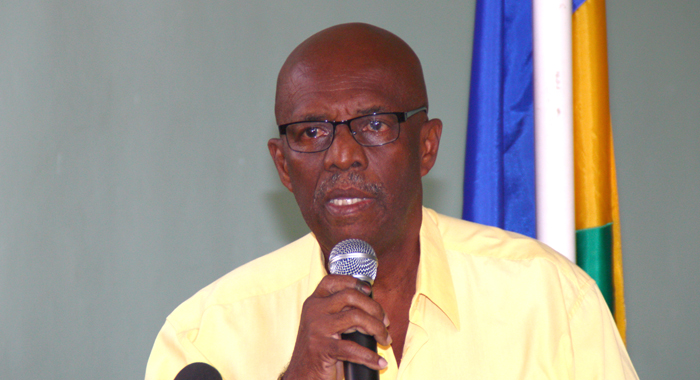 The seven New Democratic Party (NDP) candidates elected in the Dec. 9 general elections will be sworn in as Members of Parliament on Tuesday “strictly for technical legal reasons”.

Party leader Arnhim Eustace also said in a national broadcast on Wednesday that while NDP MPs wanted to stay away from the opening of the new Parliament, the party’s lawyers have advised that the duly elected members on the NDP’s side “must attend and be sworn in”.

“This, they have advised, is strictly for technical legal reasons; and should in no way be seen as a contradiction to our stance,” Eustace said in the broadcast in which he urged NDP supporters to have a reflective Christmas and prepare for the continuation of  protests suspended for the Christmas holidays.

The NDP has rejected the results of the elections, which officials say was won by Ralph Gonsalves’ Unity Labour Party (ULP) for a fourth consecutive time.

Electoral officials say the ULP won eight of the 15 parliamentary seats, while the NDP won the remaining seven, a repeat of the 2010 election results.

But the NDP is claiming victory in Central Leeward and that it is the legitimate government and has gone to court over the matter.

Eustace announced on Dec. 12 that the elected NDP candidates would stay away from Parliament because doing so would indicate that they have accepted the election results.

But he recanted that position Wednesday night for the second time this week, adding that after the swearing-in, NDP MPs will hold the “so-called government” to account

“It was our desire to stay away from the very beginning. But we have listened to our lawyers and to many patriotic Vincentians on this issue.

“Once we are officially sworn in as MPs, rest assured that we have appropriate ways to ensure that this so-called government accounts to we the people.

“As we go forward, be wary of attempts to divide the community on this issue,” said Eustace, who has led the NDP to a fourth consecutive defeat.

Political observers say that the political career of the 70-year-old leader — who was elected MP for East Kingstown for a fifth consecutive term — is ending and it is only a matter of time before the 40-year-old NDP elects a new leader, if it is going to continue to be relevant in Vincentian politics.

Eustace said the ULP, which he described as an “illegal regime”, will want to make “this on-going struggle about me or about my party.

“We should not let them derail us. This struggle is about the people of St. Vincent and the Grenadines — we the people,” Eustace told listeners.

“One thing we accept is that undeniable fact of history, that a people united can never be defeated.
And so we chose to go forward on this matter on our feet,” he said.

Eustace called on listeners to  “tell everyone about our declarative statement — no retreat; no surrender!

“Have yourself a Reflective Christmas – and get ready to uphold justice,” he said.