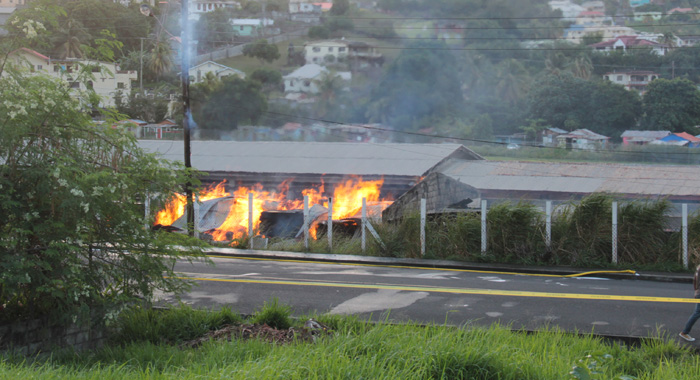 The fire continued to blaze at 7 a.m. Thursday, five hours after it was first reported. (IWN photo)

Arson is suspected in the huge fire at the Public Works compound in Arnos Vale on Thursday that destroyed a warehouse full of building materials.

Prime Minister Ralph Gonsalves sought to link the fire to the on-going protest by the main opposition New Democratic Party (NDP) over the Dec. 9 election results, but said he was not blaming the party for the blaze.

“… the Commissioner of Police indicated to me that they have a reasonable suspicion that it is arson,” he told a press conference Thursday morning.

He said the fire will affect the government’s social programmes.

“… apart from the fundamental law and order question, … the immediate effect [of the fire] is that an old lady or an old man who has an unfinished Lives to Live unit, that that person has the imminent hope of that taking place dashed, at least temporarily. And persons who are holding vouchers — poor people, if they were to get that material in the next week or two, it may be several weeks or months.”

The fire continued to blaze past 7 a.m., five hours after the alarm was raised.

A large amount of building material went up in smoke notwithstanding the use of one of three fire trucks purchased for use at the Argyle International Airport, which is under construction.

Gonsalves noted that the warehouse contained building materials for the Ministry of Housing.

Lives to Live is a programme under which the government builds small wooden houses for elder and poor Vincentians.

Gonsalves said persons with vouchers to collect building materials redeem them principally at that storage facility, located just outside the runway of E.T. Joshua Airport.

“So, apart from any possible or probably criminal character of this fire, this is a fire directed against the poor people of this country, the vulnerable and the marginalised,” Gonsalves said.

He said that while galvanised roofing sheet and large quantities of plywood have been destroyed, fire fighters contained the fire, so that it did not affect another area of the premises in building materials is also stored.

“I do not want to speak to the evidence which the Commissioner of Police drew my attention to for them to conclude reasonable that it is arson. That is not my province; that is the province of the police to speak toward at the appropriate time. But that is the thesis, that is the reasonable suspicion upon which they are operating.”

The fire took place “within a broader context” in which the opposition is not prepared to accept that they lost the Dec. 9 general elections, Gonsalves said.

Election officials say that Gonsalves’ Unity Labour Party won 8 of the 15 electoral seats and a fourth consecutive term in office.

But the NDP has maintained the vote was rigged and that it is the legitimate government.

Gonsalves accused the NDP of “engendering anti-government and anti-Supervisor of Elections sentiments to a degree that a text can be written, metaphorically, even though they themselves to don’t write the text…”

He claimed that the media and the public know this and the NDP will also know that persons “would come to reasonable conclusions.

“Clearly, I cannot be as irresponsible to accuse the opposition of this fire. No one can reasonably do so, but a context is being manufactured in which this type of behaviour is accorded a veneer of legitimacy,” he said.

“If the police are proven correct with their reasonable suspicion, it is a crime.”

Gonsalves said that fires either start by accident or arson.

He said that while there can be spontaneous combustion, as in the case of a bushfire, this doesn’t happen in buildings.

Gonsalves told the media that the blaze takes place in the context of persons who are “clearly eager to set fires” and mentioned the two instances of Molotov cocktails found at the state-owned electricity company over the past week.

Gonsalves also said that when the Cabinet was sworn in in Kingstown last month, persons lit a fire in front of Y De Lima department store on Bay Street, Kingstown.

“Some persons, as a form of political protest, are not opposed to lighting fires,” he said.

“I am sure that the opposition will denounce the fire. I am quite sure. And no one would be able, reasonably, to say that such denunciation is not sincere.

“But if a context is manufactured or engendered where elements whom you are leading, for one reason or the other, are encouraged to believe the falsehood that the elections were not free and fair, that they themselves would feel motivated to commit unlawful acts,” Gonsalves said.