Eustace fires back at Gonsalves over Public Works blaze comments 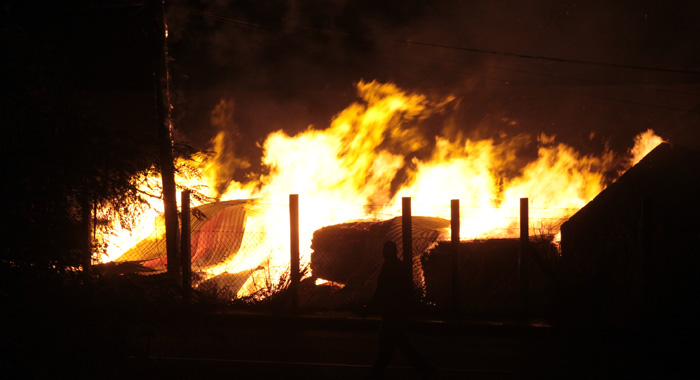 Leader of the main opposition New Democratic Party, Arnhim Eustace, on Thursday fired back at Prime Minister Ralph Gonsalves over the “lame attempt … to ascribe political motives” for the fire at the Public Works facility in Arnos Vale earlier that day.

“The question must be asked — who benefits from a fire at the Public Works building? Who will want to destroy any documentary evidence of bribery as related to the last general election?” Eustace said in a statement Thursday afternoon.

“Therefore, we do not think Gonsalves’ views on this latest fire have any weight in this matter because he has lost legitimacy at home, and has reduced St Vincent and the Grenadines to being a laughing stock abroad,” Eustace said.

The huge fire, which started sometime around 2 a.m. and continued to burn at 7 a.m., destroyed a warehouse and its contents: building materials.

Speaking at a press conference at 9 a.m., Gonsalves cited police as saying that arson is suspected in the fire.

He placed the blaze in the context of the ongoing NDP protest over the Dec. 9 election results, which the party said was stolen.

Gonsalves, however, stopped short of blaming the NDP for the fire, saying it would be irresponsible to do so.

Eustace said in the statement that the NDP has noted “the widespread reports about the fire at the Public Works building at Arnos Vale, and the lame attempt by this illegal Prime Minister to ascribe political motives.

“But importantly, he himself announced that police investigations are on-going. “Therefore, any responsible leader will allow for the police to complete their investigations before making any assertions, in an attempt to fan partisan political flames,” Eustace said.

He said that the NDP is “getting increasingly wary that the comments of the Prime Minister on this matter, as well as his high-handed approach to peaceful demonstrators could be a deliberate ploy to increase tensions in the country and orchestrate the deterioration of the security situation so that he can call a state of emergency to extend his illegal rule.

“If it turns out that the fire was deliberately set, we will condemn it, as we now condemn this illegal Prime Minister’s irresponsibility in this matter,” said Eustace, who is also leader of the parliamentary opposition.

He said it must be noted that

Thursday’s fire “is the latest of a series of unexplained fires at government buildings.”

He spoke of the blaze that destroyed census document at the Financial Complex in October 2011 and the fire last August that destroyed documents at the old Treasury Building.

“Then there was the suspicious government-approved burning of 1,300 passports. Up to this day we have not heard anything from the government about the cause of these fires,” Eustace said.

Reports say that a standing fan caused the blaze at the Financial Complex, and Minister of Transport and Works Sen. Julian Francis suggested that the fire at the old Treasury Building was caused by vagrants.

Eustace said on Thursday that the NDP is putting “Gonsalves on notice that we will stand resolutely against any attempts to seek to use any developments to harass and intimidate any of our people under the guise of law and order.

“And we are confident that our party will be the one that will ultimately restore the good name of St. Vincent and the Grenadines,” Eustace said.