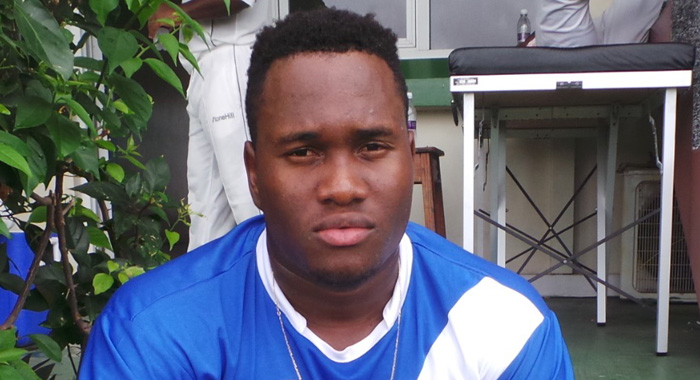 Two Vincentians are in Bangladesh as part of the West Indies Under-19 cricket team that left the region earlier this week to participate in the International Cricket Council’s (ICC) Under-19 World Cup, from Jan. 22 to Feb. 14.

The two are batsman Gidron Pope and pacer Obed McCoy.

Pope, a talented left-handed opener and right-arm offspinner, is being looked at as possibly SVG’s best bet since the late Alfie Roberts to wear the senior West Indies colours as a test batsman.

Roberts, a right-handed top order batsman, played a solitary test for the West Indies in 1956 against New Zealand, where he made 28 and nought. Since Roberts made his debut, five other players have represented the West Indies at the test level, four seamers in Winston Davis, Ian Allen, Cameron Cuffy and Nixon McClean and before them, wicketkeeper Mike Findlay.

Having represented SVG at all three levels, U15, U19 and senior, Pope a batsman with a wide array of shots, has been spoken of highly by persons in the regional cricket setup and has attended a number of camps as a way of nurturing and developing his talent. He has also represented and captained the Windwards at the U15, U17, and U19 levels and was given an apprentice contract by the St. Lucia Zouks in the 2015 Caribbean Premier League (CPL).

Pope, who plays for The News Spartans in the local Premier Division, holds the record for the highest individual score in schools cricket when he hit 248 for the Mountain View Academy against Georgetown Secondary three years ago.

McCoy, a tall slippery left-arm seamer, has impressed since at the U15 level and was looked upon as a bright prospect by former SVG and Windwards captain, Lance John. McCoy, who delivers with a high arm action, received rave reviews when taking part in the Windwards U19 tournament in Dominica last year and created a big impression in the subsequent West Indies tournament. This performance saw him called into the West Indies training squad in Jamaica.

“The coaches said they liked my attitude and work ethics and they encouraged me to continue training hard and to remain focus,” McCoy said on his return home back then.

McCoy indicated then that it was his intention to make the “final cut” by continuing to train hard and practice long to iron out any areas that were not up to standard. The result was that he made the final squad and will play in conditions that will be somewhat alien to him with slow low pitches and conditions, which at times could be cold.

He said that he spoke to players who have played on the Asian continent and have received some good advice on how to best to bowl there.

The Team Rivals pacer said Deighton Butler, his coach and club mate, has been very helpful in his preparation for the tour by providing “little tips”.

Pope and McCoy are following in the footsteps of Kenroy Martin, Stephen John, Kenroy Peters, Darnley Grant, Delorn Johnson, Sunil Ambris and Ray Jordan as Vincentian players who have represented the West Indies in the ICC U19 World Cup.

John, who is a member of the local selection panel, said that he had looked at both athletes and was confident that once they remained focus that they would develop into “fine players”.

“I have had a very close relationship with these two young guys and have given them what advice I could over the years and am happy that they have made the team. I have told them not to sit on their laurels because there are lots of monies to be made now so try to perform when the opportunities are provided,” John said.

The Sports Ambassador said that he implored both players to be disciplined and to work hard on their game at every opportunity while striving to develop a positive image as well.

Guyana’s Shimron Hetmyer will captain the team for the tournament. The top-order batsman will play in the tournament for the second time. He was a member of the West Indies squad at the ICC Under-19 World Cup 2014 in the United Arab Emirates.

He is one of two players in the squad with first-class experience along with fast bowler Alzarri Joseph. Hetmyer has played six matches for Guyana Jaguars in the WICB Professional Cricket League.

West Indies will face Scotland and South Africa in a two-match 50-overs series, which will form part of their preparation camp ahead of the tournament.

The West Indies best placing at the ICC Under-19 (Youth) World Cup came in 2004 when they finished runners-up to Pakistan.

The Young West Indians placed third in the inaugural competition in 1988 and third again in 2010. In the last two editions (2012 and 2014) the Caribbean team finished sixth.