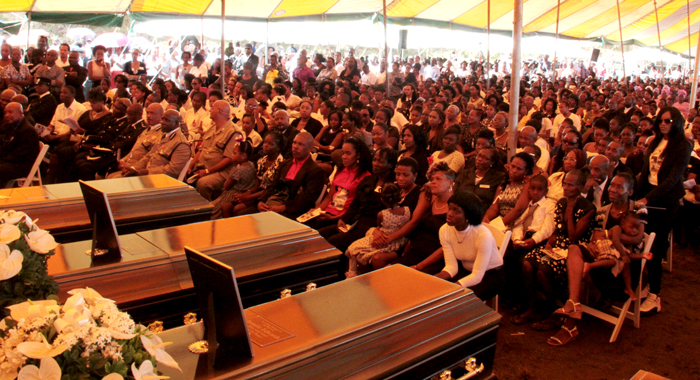 Five students died when a minivan careened down a hill and plunged into the sea at Rock Gutter on Jan. 12, 2015. (IWN photo)

A number of activities will begin today to mark the one-year anniversary of the Rock Gutter tragedy, which claimed the lives of seven students on Jan. 12, 2015.

Jamalie Edwards, 14, and his brother, Jamall, 12, Anique Alexander, 11, Racquel Ashton, 17, and Glenroy Michael, 16, Chanstacia Stay, 15, and Simonique Ballantyne died on Jan. 12, 2015 when the minibus in which they were travelling plunged into the sea at Rock Gutter — an uninhabited area between Owia and Fancy.

Fourteen other passengers, 11 of them students, survived the accident.

The events, which are being organized by relatives of the deceased, begin with a candlelight vigil at Rock Gutter from 9:30 p.m. to midnight Monday.

Attendees are asked to bring along candles.

On Tuesday, there will be a wreath laying ceremony at Rock Gutter at 11:30 a.m.

This will be followed at 12:45 p.m. by a motorcade to the Fancy Cemetery, for the laying of wreaths on the graves of the five students buried there.

A memorial service takes places at 2 p.m. Tuesday at the Fancy Playing Field.

Prime Minister Ralph Gonsalves held a private function for the relatives of the students at his private home in Gorse on the weekend.

The Rock Gutter tragedy has pulled at the strings of the tight-knit North Windward community of Fancy, where all of the occupants of the bus lived.

A rift emerged last July among residents of the village as Fancy continues to seek answers about what caused the crash.

Some members of the community said they believed that the owner of the bus, Ehud Myers, who was the conductor on the fateful day, and the driver, Ranavan Nanton, should be charged for negligence.

On the other hand, Myers, a 67-year-old pastor, told iWitness News then that threats had been made to his life and members of the community has accused him of being a murderer.

On Nov. 11, Myers, Colbert Bowens, a 51-year-old principal; and Davanan Nanton, a 36-year-old chauffeur, all residents of Fnacy, were jointly charged with by omission caused the death of Racquel Ashton, Chanstacia Stay, Glenroy Michael, Jamall and Jamali Edwards, Simonique Ballantyne and Anique Alexander.