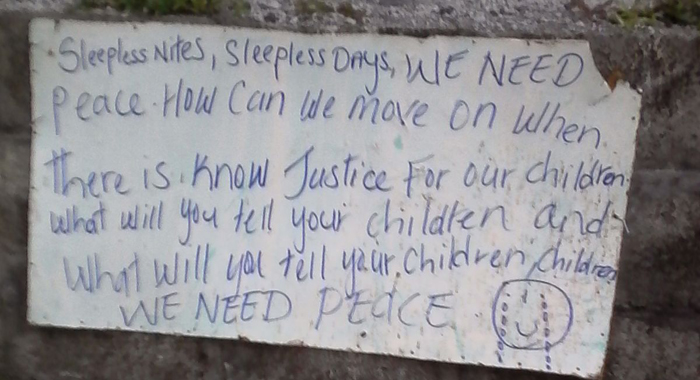 One of the placards erected in Fancy on Tuesday.

A rift has emerged among residents of Fancy as the North Windward village continues to seek answers about what caused the Jan. 12 minibus crash that resulted in the death of seven students.

Some members of the community believe that the owner of the bus, Ehud Myers, who was the conductor on the fateful day, and the driver, Ranavan Nanton, should be charged for negligence.

On the other hand, Myers, a pastor, says that threats have been made to his life and members of the community have accused him of being a murderer.

The students died when the privately-owned minibus that transported them to school careened down a steep section of the road and crashed into the sea at Rock Gutter, an uninhabited area between Fancy and Owia.

Police in Kingstown told I-Witness News on Tuesday that their investigator is putting his findings together and a report could be presented to the Commissioner of Police within a month.

Separately on Tuesday, some residents of Fancy held what was described as “more of a picket”, erecting placards in their community, questioning how the students died.

A parent of one of the dead students told I-Witness News that “the guys on the block” who lost relatives in the accident and others who didn’t lose relatives, hung up placards at different areas in the village.

“Our children dead like dog. Where is the justice,” one of the placards said.

Yet another placard demanded an apology from Myers.

A parent who lost a child in the accident said that villagers feel they cannot say anything concerning the accident because of the reaction of the relatives of Myers and Nanton.

“Whatever they (relatives of deceased) say, they (relatives of Myers and Nanton) get angry; they get upset. And it reached to the point where they made remarks about one of the deceased’s parents, and it was a real horrible scene, because they got upset. And I guess from that everything happened,” the parent told I-Witness News.

The parent said villagers are also getting impatient because of the length of time that it is taking for police to present their findings.

“And they are saying they cannot hear anything from the police, so if the deaths are just going down like that without nothing happening,” the parent said.

“We have not been told and that is the frustration. … That is why the parents and the villagers are so frustrated — because we don’t know. Up to now we don’t know anything — whether or not Mr. Myers, Mr. Nanton are going to be charged…”

The parent said some villagers had said they heard that the steering wheel failed and caused the accident, but others are saying it was a brake failure.

“After the accident, we got to find out that they knew that something was wrong with the vehicle before the day of the accident,” the parent said.

But Myers, a pastor, told I-Witness News on Thursday that he, too, is still struggling to come to terms with the death of the students and is being treated for a heart condition.

“The thing like it throwing me off when I remember — make the heart swell up and burning me and so now I have to be using tablets for the heart and the blood and all thing,” he told I-Witness News.

He said that the minibus did not have any problems before the accident.

“The van didn’t have no problem. Is long time the van taking school children to school. They are assuming all thing,” he said.

He told I-Witness News that when the police interviewed him in hospital after the accident, the police said they heard that he came out of the van before the crash and was in the road walking up and down.

“I went right down into the sea with the van. Accidents – those things are something which we really can’t understand,” the 67-year-old man said.

Myers told I-Witness News that last year he was travelling in a vehicle that suddenly “pick up with one speed” and went over an embankment in South Union.

“I was in the back seat and I reach right up where the driver is. Some of the seats break out,” Myers told I-Witness News of the crash which occurred in 2014.

He said some residents of Fancy are blaming him for the Rock Gutter tragedy.

He said the vehicle went into the sea after all the weight went on to one side.

“I know for sure that if you are driving and you are travelling somewhere with your family, you wouldn’t willfully carry your vehicle over a bank to take your life and your family’s life.”

Myers spent two months in Kingstown, where he was treated for his injuries, including to his neck and leg.

He said that since returning to Fancy he has been told that some persons have threatened to shoot him.

“Some sending threat saying they go shoot me — the young men and them in the village,” said Myers, who noted that he sometimes goes to church at night.

“Sometimes, when me ah come home a night I kind of scared because some of the place don’t have light and you never know.”

Myers said he did not know about the exchange of words between his relatives and those of the dead students.

“I don’t roam the street you know. Only if I have to walk the road [while going to church],” he said.

Monday’s picket took place as parents of the deceased students were arranging an event for yesterday, Thursday, during which Prime Minister Ralph Gonsalves was presented with a token of appreciation for his response after the accident.