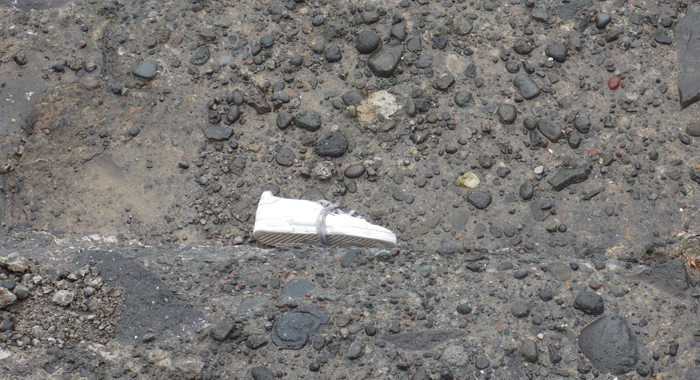 A student’s shoe lies at the side of the road after an accident that claimed five lives, including students, in Rock Gutter on Monday. (IWN Photo)

At the side of the road in Rock Gutter, an area along the road between Owia and Fancy in northeastern St. Vincent, a single white shoe lies soaked by seawater on the pavement midmorning Monday.

In the raging sea nearby, books rise intermittently to the surface, only to disappear again under the white foamy water of the Atlantic, which continuously batters St. Vincent’s northeastern coast.

Here and there, every so often, a student’s knapsack rises to the surface.

At another point along the coast, what appears to be an article of clothing churns in what, ironically, seems like nature’s washing machine.

“Look one dey (there)!” a voice shouts. And the hundreds of persons peering into the sea move in the direction indicated.

The voice is not talking about shoes, books, knapsacks or articles of clothing.

Someone has caught a glimpse of a students’ body bobbing about in the water.

A group of men attempts to retrieve a body from the raging sea at Rock Gutter on Monday. (IWN photo)

Almost as quickly as the body surfaces, it disappears again, masked by the white foam that forms as the 10-foot swells lash against the rocky shore.

It will be another hour before the water brings the body close enough to the rock for residents of North Windward — home to descendants of this country’s only national hero — to grab it and bring it ashore.

With the retrieval of the body, that of teenage female clad in the skirt of North Union Secondary School, the North Windward community of Fancy — where residents live as one large family — and by extension the whole of St. Vincent and the Grenadines, is again stabbed by the confirmation that another person has been added to the tally of lives lost in the unexplained tragedy.

If it is any consolation, the retrieval of the body, and the funeral to follow, will provide some level of closure.

By Monday evening, officials would confirm that five persons died, two are missing, and 10 hospitalised after a minibus, transporting 21 passengers, including 14 students, overturned, falling down an embankment and ending up in the sea.

Officials are yet to release the names of the dead and missing.

The remains of the bus — a flat sheet of metal with only the tyres still intact — lodged among the rock and battered by the waves, tell the miracle of survival of its last passengers.

Once again, tragedy brings St. Vincent and the Grenadines together as persons travel to the area, some 33 miles from Kingstown –the nation’s capital — to see what has happened and to offer comforting words.

A police officer, Constable Hadley Ballantyne, in brown, collects information on the persons who were in the bus at Rock Gutter on Monday. (IWN photo)

At the scene, a reporter offers a police officer his notepad as the law enforcement official begins the difficult task of trying to determine who was on the bus. Prime Minister Ralph Gonsalves and Leader of the Opposition Arnhim Eustace, who had earlier Monday been preparing for the Budget — an especially important, sometimes point-scoring exercise in an election year — chat at the side of the road.

Relatives of persons believed to have been on the bus cry as they wait in the back of a pick-up truck for word about their loved one.

As state officials try to implement crowd control measures, a police officer insists that the crowd of civilians moves back.

One of the police officer’s colleagues reminds him that the same civilians are the ones who have been recovering bodies from the sea.

All around, residents of the area, especially the relatives of those involved in the accident, seem to be in shock.

Reporters decide that those directly affected would be best left alone as they struggle to come to terms with the magnitude of the tragedy.

“From my own recollection, I think this is the worst tragedy in this area for all of my life,” Member of Parliament for North Windward and Minister of Housing, Montgomery Daniel tells I-Witness News at the scene.

Daniel, who lives in Sandy Bay, another North Windward community, says that he went to school in Fancy as a young schoolboy in the 1960s.

“There has never, ever, been such a tragedy that I know of since then,” says Daniel who got the news of the accident around 7:40 a.m. while on his way to Kingstown.

“When I got here … some of the bodies were already fished out of the water and I met the ambulance on the way coming,” says Daniel who transported relatives of the injured to their homes to collect supplies for their hospitalised loved one.

“And so doing, I got more precise information as to the numbers that existed on the vehicle. There were at the moment some 19 or 20 children in the vehicle. One who attends the Grammar School, 16 who attend the North Union Secondary, and two or three to the Georgetown Secondary.

“I [saw] bodies every now and again being pushed around by the waves. But it was difficult, even for the Coastguard to come close by to assist.

“We [saw] support coming from local persons here in Owia,” he says, adding that a local fishing vessel and divers from the area were assisting the Coastguard.

“They were able to help in having four bodies coming out of the water,” Daniel said of the civilians. “The families are very distraught at this time, and I want to, on behalf of the government and on my own behalf, extend my deepest sympathy to the families.

“From a biblical perspective, it is something that I would speak about every year, that Jesus Christ came to save mankind, and he died for all of us and the world rejoiced that we had a saviour. But, at the same time, Herod massacred children under 2 years old. So, while we rejoiced, there [was] an element of suffering. So I am always conscious and concerned that at Christmas time, there can also be tragic moments. And so, I want to wish the families well.”

The Government will try to ensure that the families receive the support they need, Daniel says.

Retired educator, Pastor Samson George, tells of the impact of the tragedy on Fancy, where he says the community is like one large family.

“It is a sad thing what happened in Fancy this morning … it’s almost heart-breaking knowing that you have a loved one going to school and they departed so quickly; it’s really sad,” he says, adding that the communities North of Rabacca Dry River are all in mourning.

“I understand that no school is being kept right now, because of the connection with the families and the loved ones in the school,” the pastor says.

Two members of his congregation, both females, were on the bus, and at the time of the interview were still missing at sea.

“It is just a sad case for the families and the people of St. Vincent and the Grenadines, because it affects everybody,” says George, who was originally scheduled to travel to Kingstown to do painting work at Fort Charlotte but decided to stay at home

“It is alarming knowing that your child left home this morning. You may have hugged them, kissed them and wished them a good day. And then to be greeted with the news that your child died, it is hard to cope with. It’s really hard.

“I have seen some of the loved ones here and their families, they are heartbroken, they can’t say anything. It is just too much pressure flowing through their heads, and they really can’t restrain themselves properly to say anything at all. It is really, really sad. All we can do is hope and pray and strengthen them that remain,” George says.

He speaks of the fragility of life, adding that in light of this, one must always be prepared for death.

“We have to strengthen those who are mourning. Our community is really intertwined. Everybody in Fancy is related to the other. … You can imagine there were 15 families or more in the van, so the entire community is mourning and grieving.

“It is rough, man. I just pray that the families find strength in knowing that God is in control and he can see them through this rough time.”

George notes that the tragedy comes just one year after the Christmas Eve flood of 2013, which claimed 12 lives.

“I think this is wake up call for every individual. Just over a year ago, we had the flood, and now, just a few months after the flood, is another disaster.

“It is really tragic. It is a great loss for St. Vincent and the Grenadines, particularly for the people over (north of) the Dry River,” he says.