At funeral, daughter says ‘Father Mac’ was a man with a ‘deep sense of commitment’ 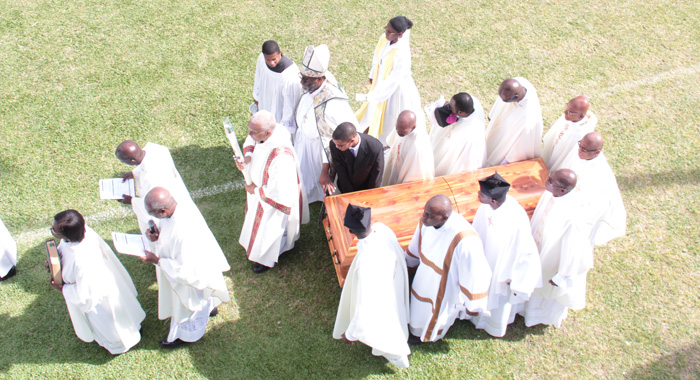 Dean of the St. George’s Cathedral, the Very Reverend Patrick Ezekiel McIntosh was buried on Friday after a funeral service in which his daughter, Camille A.R. Johnson, described him as a man with a “deep sense of commitment.

“Commitment to God; commitment to family; commitment to the Church and its people,” she in a tribute at the funeral service, which was held at Victoria Part to accommodate the thousands of funeral goers.

McIntosh, or “Father Mac” as he was affectionately called, died on Jan. 5 at Milton Cato Memorial Hospital after falling ill that afternoon.

He would have celebrated is 69th birthday on March 22.

Johnson told mourners, who included state and church officials, that she was not declaring that her father was a perfect man.

“He was a man with his own convictions and shortcomings but his existence could not have been an accident. He was called to life and formed in God’s image and likeness. My Daddy understood all too well that without God in his life there was not much sense in anything as God had a purpose for his life,” she said.

She said that a few days before the funeral, she sat at her father’s desk in his office at the Deanery, “reflecting on memories of Daddy as I journeyed through a spectrum of emotions and feelings that made me cry, smile and laugh and yes sometimes even frown”.

On his desk, she found the last sermon he would ever write for a friend’s funeral service, she said, noted that he was always well prepared.

The sermon was entitled “Discover your calling” and in it McIntosh noted, “None of us are an accident. All of us were called into life. It is a life formed in the image and likeness of God”.

McIntosh ended the sermon he would never deliver by saying “we need to discover the meaning and purpose of life by looking within ourselves. We need to begin with God, our Creator, You and I were made by God and for God. If we do not come to such understanding, life will never make sense”.

“I paused and thought of my moment of despair and doubt at the Milton Cato Memorial Hospital that dark Tuesday afternoon, screaming loudly “why my Daddy? No, not my Daddy! I needed my Daddy! I further questioned ‘why now?’ But then Daddy spoke and I listened – ‘Cam, do not question God or His purpose. His reasons are beyond our understanding and His will and ways are perfect’,” Johnson said.

She said the presence of the mourners at the service “indicates that you had come into contact, spoke to, danced with, were counselled by, worshipped with or just shared a smile or light moment with this very special man whom I have had the privilege of calling Daddy or Da for over three decades. Patrick Ezekiel, a man called by God for a purpose.

“And while we mourn for him, Daddy would want you to keep in your hearts his memory and the lessons that he taught you, the words that he passionately spoke and that beautiful smile that made you know that all is well,” she said.

Former parliamentarian John Horne delivered the eulogy and the homily was delivered by the Right Reverend Leopold Friday, Bishop of the Windward Islands.

McIntosh was buried at the St. George’s Anglican Cathedral churchyard in Kingstown.

One reply on “At funeral, daughter says ‘Father Mac’ was a man with a ‘deep sense of commitment’”