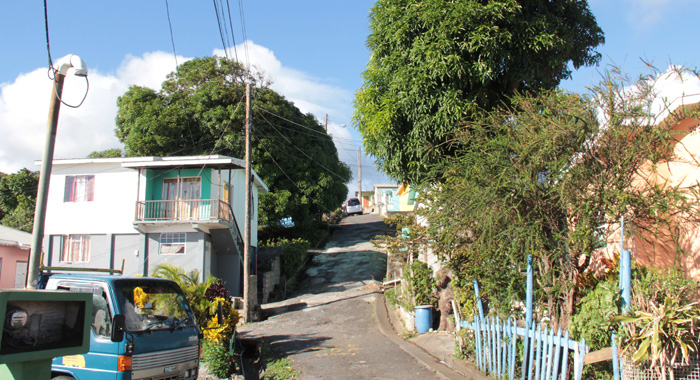 The area in Sion Hill where the broken street light is located. (IWN photo)

Residents of Village, Sion Hill say that they hope that the authorities will act swiftly to repair a broken streetlight, now that some five persons have been robbed since it stopped functioning months ago.

The light is yet to be repaired even after police have told the state-owned electricity company VINLEC that the darkness in the area is a security concern to them, as unscrupulous persons are using it as cover to commit crimes.

The latest robbery attempt took place Thursday night at the home of a man living near the broken light.

The man sustained injuries to his leg and head as fought off the armed intruders, who fled without the cash they had demanded when they entered his home sometime around 9 p.m.

Another victim, a woman in her late 20s, said she was robbed in the area on Oct. 17, as she and a male companion were walking home around 8 p.m.

“Here (the area) was in darkness. He (robber) just put something by my neck and tell me ‘Gi mi everything’,” the woman, who asked for anonymity, told iWitness News.

She said she gave the robber her purse, which contained her money, her ID and other cards, and a tablet computer.

“We called VINLEC even before I got robbed; a million times; everybody called VINLEC,” the woman told iWitness News.

“After I got robbed, a police officer called VINLEC and nothing was done. They say they would send someone; every time they are saying that, but nothing.

“They need to put back on the light because it is hard to see people are paying their bills and can’t be safe,” the woman said.

The police called VINLEC again on Friday after the latest robbery attempt.

A VINLEC employee followed up on the complaint when iWitness News called Monday morning. He said the supervisor has indicated that the light will be repaired today, Monday.