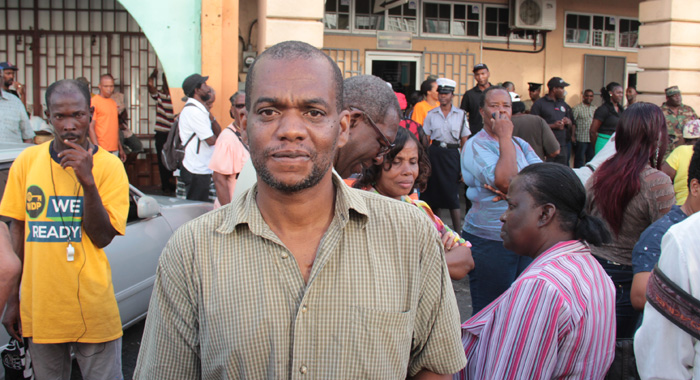 Grenadian journalist, Hamlet Mark, returns to report on the protest after being released from police custody Thursday afternoon. (IWN photo)

Grenadian journalist, Hamlet Mark, was Thursday afternoon released from police custody without charge after being detained for hours.

He was taken into custody while covering a police crackdown of a protest by supporters of the main opposition New Democratic Party (NDP) outside the Electoral Office in Kingstown.

The waning protest was reinvigorated on Thursday, its 38th day, after police took nine protesters into custody on Wednesday and slapped four of them with illegal assembly charges.

Mark, who runs the St. George’s-based Caribupdate News Service, told iWitness News he was filming the crackdown when a senior officer ordered that he be taken into custody.

“I was just taking some shots and one of the officers who I filmed yesterday arresting a lady said, ‘Oh you feel you is police? Go with him.’”

Mark, who is also an advisor to the Keith Mitchell government in Grenada, said he went along with the police officers to the Central Police Station, located a few hundred yards away.

He told iWitness News that while he was being taken to the police precinct, he asked the officers if he was under arrest and they said that they did not know.

Mark said that at the station, he was booked and relieved of his camera and microphone, which were returned to him with all files in place when he was released.

He, however, said that he was verbally abused by police officers while in custody.

“What I got was a slew of verbal abuse from officers there that my reports [are] putting the government in a bad light and embarrassing the government — I am from Grenada, they don’t want me here, and I am anti-ULP (Unity Labour Party) and that kind of thing,” Mark said.

He dismissed the accusation by the police as “laughable”.

“After two and a half hours in there, they said they would let me go without charges, but investigations continue — whatever that means,” Mark told iWitness News.

Mark has made several trips to St. Vincent over the past weeks, covering the general elections and the developments that have followed.

Electoral officials say that the ULP won the elections and a fourth term in office by taking eight of the 15 parliamentary seats while the NDP won the remaining seven.

Regional and international observers have declared the elections free and fair.

The NDP, however, claims that the ULP stole the ballot and is contesting the results in court.

It was, however, the first time that he was detained by police while practising his craft.

“I have been throughout the Caribbean, I have been in other areas as well. Never have the police tried to intimidate and harass me,” said Mark, who has been a journalist or decades.

Nine opposition supporters were taken into custody during a police crackdown on Wednesday and four of them appeared in court on Thursday slapped with illegal assembly charges.