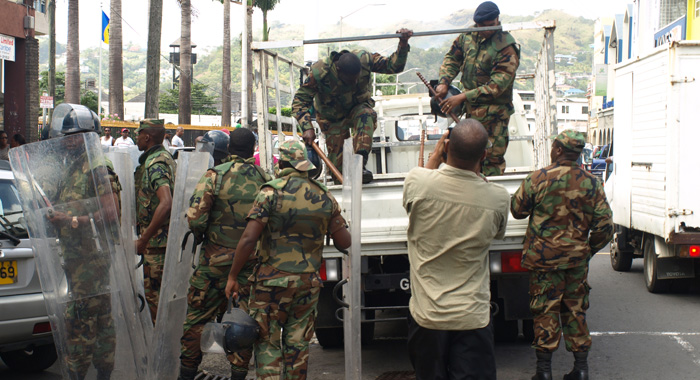 Grenadian journalist Hamlet Mark films the arrival of police at the scene of the protest last Thursday. (IWN photo)

Prime Minister Ralph Gonsalves says that the Grenadian journalist who was detained by police in Kingstown last week is a paid operative of the main opposition New Democratic Party (NDP).

Gonsalves further accused Hamlet Mark of trying to “demonise” Assistant Commissioner of Police Christopher Benjamin — the officer who ordered his detention — and to “present himself in some saintly manner”.

Mark told iWitness News on Thursday that he was filming a police crackdown on opposition protesters when Benjamin ordered that he be taken into custody.

He was he was released without charged after two and a half hours, but was verbally abused by police officers when he was in custody, Mark said.

Gonsalves, who is also Minister of National Security, commented on Mark’s arrest on radio on the weekend.

He, however, added that it is perfectly in order for Mark to be in St. Vincent and the Grenadines as a citizen of an Organisation of Eastern States nation.

“He comes in, he doesn’t need a work permit and he works for whom he wants,” Gonsalves said.

He, however, said Mark cannot interfere, either as an independent journalist or a paid political operative, at any place where the police are seeking to maintain law and order and to prevent the subvention of public order or public safety or to make sure that individuals who carry out their duties in relative peace.

The NDP claims that Gonsalves’ Unity Labour Party stole the Dec. 9 general elections and NDP supporters have been holding protests daily outside the Electoral Office since.

Gonsalves said that he understands that the day before Mark’s arrest, Mark was at the picket line and Benjamin was giving instruction to officers and persons nearby.

“And Hamlet Mark came in front of them with his equipment, his camera and his microphone, and he was told to go back. And I understand he posted that on the very Wednesday on his site online that Benjamin told him to go back,” Gonsalves said.

“Now, the next day, the Thursday, I have been advised that he got even closer to ACP Benjamin. Benjamin now, considering that this is not only an interference but it is an overbearing interference in the police doing their work and obstructing the police, so he directed that he be taken down, away from the scene, and to the barracks,” Gonsalves said.

The Prime Minister noted that no charges were brought against Mark.

“Presumably, they could have charged. I don’t know,” Gonsalves said.

He noted that the Director of Public Prosecutions has made the point repeatedly that the Full Code Test informs the decision to press charges.

Frist, there must be sufficient evidence to secure a conviction, and, second, the Crown must decide whether it is in the public’s interest to prosecute.

“So that it is not because a man may, in fact, break the law, they may not consider it worthy, in the circumstances, to prosecute him, for one reason or the other,” said Gonsalves, who is also a lawyer.

When asked by a member of the panel how it can be verified that Mark is a paid NDP operative, Gonsalves asserted that his information is correct and said that the host can ask the leadership of the NDP.

“In fact, there are persons in Grenada who told him that he should not be doing what he is doing,” Gonsalves said.

Gonsalves said that at the Dec. 6 rally ahead of the Dec. 9 elections, he went to Mark and told him, “I am ashamed of you, absolutely ashamed of you that you have been associated with some progressive people in Grenada and you come here to work for such a backward party.’

“In putting the banner to him nuh. He said, “I have to work’,” Gonsalves said.

Gonsalves said that even if Mark is acting as an independent journalist, he is not allowed to interfere with the police while they are carrying out a security operation.

“You can’t do it in London, Paris, New York, Washington or Toronto. Well, I wouldn’t use some other countries, including some in the Caribbean, what they’d do to you. But I just wanted to make the point that this portrayal of him as an independent journalist, that is not the case at all.”

Gonsalves said he wanted his supporters and all Vincentians to know that there is nothing wrong with Mark being in SVG, but he has to obey the law like everyone else.