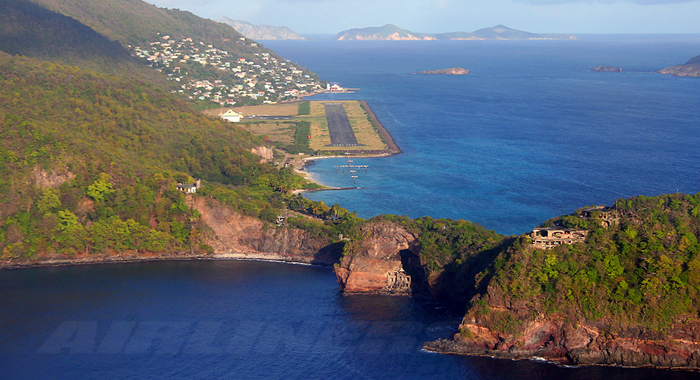 “Politicians are the same all over. They promise to build a bridge even where there is no river” (Nikita Khrushchev).

“When small men attempt great enterprises, they always end by reducing them to the level of their mediocrity” (Napoleon Bonaparte).

Sir James Mitchell’s essay, “Bequia Airport — an essential lifeline with an even brighter future“, was written in response to a brief comment I made in one of my Argyle International Airport pieces (The Missing Argyle Airport Feasibility Studies,” January 4, 2016):

“… no lessons seem to have been learned from the failure of the James F. Mitchell Airport in Bequia, a decaying facility now serviced mainly by a few tiny aircraft flying out of Barbados.”

Our longest-serving prime Minister begins his critique of this single sentence with the observation that:

Though free from the patronising rhetoric in a similar response by Rudy Matthias, CEO of the Argyle International Airport (AIA) Development Company, to a scathing but essentially accurate review of the AIA project by distinguished Vincentian engineer Herbert “Haz” Samuel, the two essays are eerily similar.

The most important similarity is the way both authors equate broad feasibility studies with narrow technical analyses. No credible person has denied that proper engineering assessments, including preliminary wind studies, were conducted prior to the construction of either St. Vincent and the Grenadines (SVG) airport. What has been challenged is whether the overall practicality of building the airports was rigorously evaluated to show whether their construction would be worthwhile from an economic cost-benefit perspective, the key issue that needs to be addressed when any large and expensive project is envisioned.

Sir James offers only one meagre bit of information about the economic viability of an airport that he fails to remind us bears his name when he says:

“The World Bank Report on Tourism, dated April 20, 1982, stated that ‘The Grenadines are the area of most tourism potential’, stressing that priority be given to the development of ‘certain basic facilities, notably jetties and airstrips’.”

All other references are to studies conducted by engineering and allied consultants (Sir William Harcrow and Partners; Caribbean Meteorological Institute and Airline Pilots; Wallace Evans and Partners; Kocks Consult GmbH) with no hospitality industry consulting expertise.

Indeed, like Rudy Matthias’s reply to Herbert Samuel, the bulk of Sir James’ essay is concerned with the technical issues of the airport’s construction which he summarises with the generalisation that:

“… the right lesson from Bequia for Argyle should be that the successful execution of an idea or vision requires the preparation of plans by consultants who are recognised experts in their particular field.”

Unfortunately, none of these “recognised experts” were specialists in what it takes to ensure that a project suits its economic goals, in this case attracting thousands of new visitors to Bequia.

But this did not stop Sir James from further arguing that:

“Without an airport in Bequia … the major hotel and villa investments from which both Bequia and SVG continue to benefit would never have been attracted.”

No proof is given for this assertion. To be sure, that tourist visits to Bequia have increased since the airport was completed in 1992 is not in question. But correlation is not the same as causation. First, Bequia, like the rest of the Grenadines, had a robust and growing tourist industry long before 1992. Second, tourist visits to mainland St. Vincent also increased after 1992 with no runway or other airport expansion since E. T. Joshua Airport opened in 1960. Third, all across the tropical world, islands the size of Bequia or smaller that can only be reached by boat have seen an increase in their tourist numbers and revenue over the past 25 years. The plain fact is that the global tourist industry has grown by leaps and bounds in recent decades. The building of new airports or the expansion of old ones has taken place to satisfy this growth, not to create it.

James Mitchell International Airport opened in 1992 to much fanfare and regular service by LIAT, among other regional carriers, from both St. Vincent Island (SVI) and the nearby airline hub in Barbados.

But in a few short years, all regularly-scheduled traffic from the mainland and all LIAT service from any Caribbean destination disappeared because of a lack of flying customers. In the meantime, holiday visits to Bequia continued to grow. This apparent contradiction is no contradiction at all: it was a straightforward result of competition from the much cheaper, better established, and more exciting way of travelling to this enchanting island — namely all manner, size, shape, and capacity of sailing vessel.

An inexpensive but well crafted economic feasibility study would surely have predicted this outcome.

Today, the only regularly scheduled air traffic between St. Vincent and Bequia requires a connecting flight through Barbados, a route only a very rich and chronically seasick-prone person would ever choose: EC$2,822 for a round trip ticket for a single passenger using SVG Air; EC$2,720 using both LIAT and SVG Air.

A direct one-way charter flight on a Mustique Aero Commander five-seat aircraft from E.T. Joshua airport to James Mitchell airport, assuming all seats are sold, costs EC$493 per person or a whopping 20 times the EC$25 boat trip cost from the Grenadines wharf in Kingstown!

This is why night landing at the stillborn Bequia airport ended years ago and its equipment transferred to Canouan, another barely used SVG airport. It is also why the airport Sir James built has been allowed to deteriorate, contrary to his denial.

All this makes it hard to fathom the former Prime Minister’s assertion that:

“… we urgently need open skies competition to lower prices and stimulate travel in our region. Cheaper air travel will not only attract more tourists; it will also give greater mobility to local residents who cannot afford the current limited service. Lower taxes would increase the volume of traffic overall and enhance revenue growth.”

More competition cannot take place without more flying customers. Neither can “cheaper air travel.” Mobility for all is already guaranteed by the frequent, convenient, regularly-scheduled, comfortable, safe, reliable, scenic, and invigorating boat travel between the islands for local and foreign residents alike who could never afford or would never be willing to fly by plane even if more competition reduced the fare by over half. Finally, high airport and airline taxes are simply a response to low traffic numbers, given the high fixed costs of any airport operation.

More surprising still is the way the former Prime Minister contradicts his position on the viability of his airport in regard to traffic numbers and economic bustle when he says:

“Should anyone doubt the impact of the Bequia airport and the vibrancy of tourism in the Grenadines as a whole, they need only check activity at the Grenadines wharf on any day of the week, and compare it to any other place in Kingstown.”

Rather than comparing the Grenadines wharf to the rest of Kingstown — a truly bustling city, if there ever was one, except on Sunday and holidays — he should be comparing traffic at the capital’s wharf to traffic at the Bequia airport to glean all the evidence needed that the latter is a classic white elephant. Two regularly-scheduled daily flights each to and from Barbados (but none from mainland St. Vincent) via SVG Air and Mustique Airways, all on tiny planes carrying less than 20 passengers, hardly compare to the boat travel to Bequia of at least hundreds of people every week — and thousands during holiday times and local events – augmented by visits by cruise ships and countless yachts during the winter season.

Despite such evidence, the former Prime Minister still believes that, airline service:

“… is the backbone of the country’s tourism economy affecting amongst other areas investment, construction and employment, as well as being the prime source of our essential tourist dollars”.

Sir James ends his essay with the single observation I agree with, “Let us not abandon the principle that small is beautiful, a concept that applies to both St. Vincent and to her sister islands.”

The former Prime Minister comes from a proud seafaring family, is an avid sailor in his own right, and is the proprietor of a famous Bequia hotel that is popular with the yachting crowd, all reasons to praise, cherish, and call for the expansion of sea travel to his beloved birthplace. But he clearly abandoned his “small is beautiful” philosophical position during his 16 years as our leader by spearheading: a huge and hideous market tomb in Kingstown; a wasteful financial complex eyesore on some of the last remains of our precious capital seafront; an oversized traffic congested and air polluting bus terminal; a chronically empty cruise ship depot featuring an outsized parking area; a long and costly Mt. Wynne road diversion meant to make room for big overseas hotels and sprawling golf courses; and an environmentally destructive and hugely overpriced Ottley Hall shipyard fiasco. But the most egregious contradiction is the Bequia airport itself: an attempt to displace or augment cheap, small-footprint travel by sea with expensive, big-footprint travel by air.

That Sir James continues to sing the praises of his boondoggle of an airport is a painful reminder that, “In politics… never retreat, never retract… never admit a mistake.” (Napoleon Bonaparte).

3 replies on “Bequia Airport — a white elephant: a reply to Sir James Mitchell”