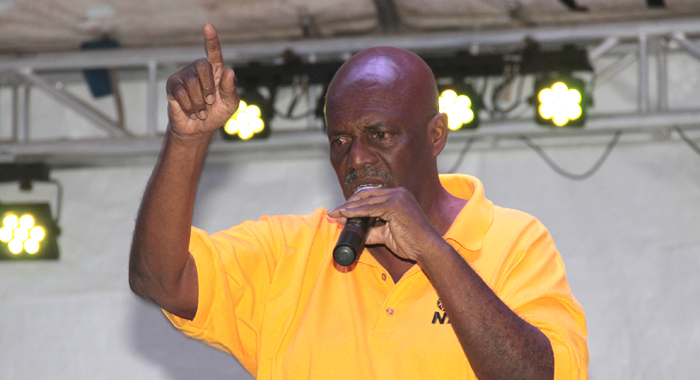 He made the suggestion at the NDP’s “victory rally” in Layou on Saturday while commenting on the two Gonsalves’ presentations in Parliament on Friday.

“And when I heard how they behaved in Parliament yesterday, in their parliament, not ours, … I knew that the end was coming. When I hear the prime minister and his son and some of the things they said yesterday, I think they need to kneel down and beg God pardon,” Eustace said.

The NDP is claiming victory in the Dec. 9 general elections, which electoral officials say Gonsalves’ Unity Labour Party (ULP) won by 8 seats to the NDP’s seven.

The NDP says that the ULP stole the vote, but regional and international observers say the poll was free and fair.

The NDP has gone to court over the elections and some of its supporters have been protesting daily in Kingstown since the results were announced.

“And tonight is part of protest,” Eustace said, adding, “But when I see the crowd that is here, I know that the protest is alive and well. And the New Democratic Party will win after the court has ruled.

He added: “And we have demonstrated that in our manifesto, but the election was stolen.”

Eustace said the NDP has “sufficient evidence which we think can allow us to win the petitions and then you will have a government in St. Vincent and the Grenadines, because we don’t have one now”.

Eustace repeated his claim that the Gonsalves government is an illegitimate administration.

He also commented on the debate of the Estimates in Parliament on Friday, which NDP lawmakers boycotted.

On Thursday, the NDP announced in a press conference that they would boycott the Estimates debate and gave their views on the figures.

“… they did less on the estimates than we did,” Eustace said of government’s lawyers’ presentations in parliament.

“We presented more to the people about what the Estimates mean than when they went to Parliament, although we did it at our headquarters,” he said.

Eustace, however, said that the Estimates were just the start and noting that the Budget is yet to come.

“And you know the Budget is a very important document… When we come to the Budget, that is another matter again.

“I don’t believe that Ralph Gonsalves is in any position to put forward any meaningful budget,” he said

“First of all, I don’t believe he understands the economics of the budget itself,” Eustace said, an economist.

He suggested that Gonsalves do like Deputy Prime Minister, Sir Louis Straker, who admitted that after 10 years in Parliament, he still did not understand the budget.

“We, in the New Democratic Party, are very confident of what we put forward in our manifesto. We believe we have the knowledge, the team and the skills to develop this country of ours, which we all love so dearly,” Eustace said.

Eustace said the NDP has seen the “stupidness” (nonsense) that the ULP administration has done.

“So I ask you to have faith in us, to rally with us, to protest with us, to be there in court. I ask you that most sincerely. I believe we are in a position to give you what you deserve and to have a brighter future for all the people of St. Vincent and the Grenadines,” Eustace told party supporters.

One reply on “Ralph, Camillo should seek God’s pardon — Eustace ”