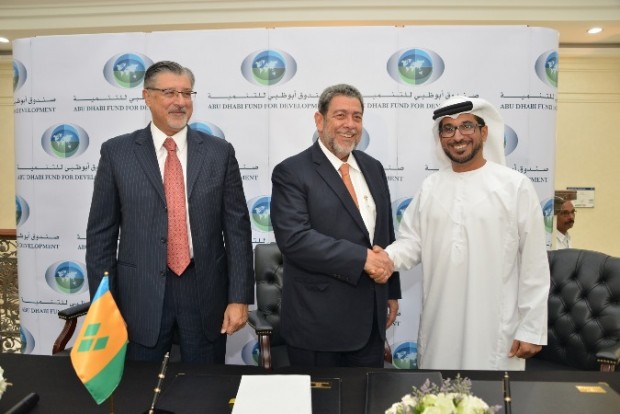 Abu Dhabi Fund for Development (ADFD) has inked an AED 55 million (US$15 million) loan agreement with St. Vincent and the Grenadines (SVG) to set up a geothermal power station in the country.

The agreement, between ADFD and SVG, was signed between Mohammed Saif Al Suwaidi, Director General of Abu Dhabi Fund for Development (ADFD) and Ralph Gonsalves, Prime Minister of SVG.

The project is being funded as part of the AED 1.285 billion (US$350 million) ADFD/IRENA project facility, set up in 2012, to provide concessional financing for renewable energy projects in developing countries affiliated to International Renewable Energy Agency (IRENA).

One of the five projects selected for funding as part of the second loan cycle facility, the power plant aims to utilize naturally occurring geothermal energy to plug the power shortage in SVG. In the long term, the project will help drive the wider energy sector and accelerate sustainable economic development across the country’s 32 islands.

Commending the UAE’s efforts to promote stronger international development relations with SVG, Gonsalves said: “The proposed geothermal power plant will give a strong boost to the energy sector in our country, supporting its economic growth and development programmes…

Suwaidi said: “ADFD has paid particular attention to the renewable energy sector given the essential role of the sustainable energy in meeting the growing needs of developing countries, and supporting their social and economic development.”

Evidence suggests that despite the enormous potential of renewable energy in acting as a key enabler of sustainable development across the world, there remain challenges and gaps in the ease of accessing global funds to support these projects so we are delighted to be able to support this project by providing essential finance.

He added, “The renewable energy projects financed by the Fund since 1974 to date have contributed to delivering clean energy for millions of people in more than 24 developing countries across the globe. These projects have generated thousands of megawatts of renewable energy, and stimulated economic growth in the beneficiary countries.”