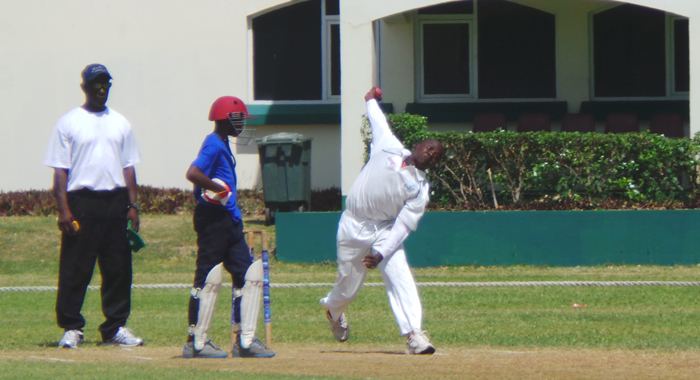 The Petit Bordel Secondary School have given an ominous warning to their rivals in the Scotiabank Inter-Secondary Junior Cricket tournament by easily brushing aside their opponents in two matches on the opening day of competition at the main Arnos Vale Playing Field on Wednesday.

They also showcased a player in Ojay Mathews, who, though a speck on the horizon, gave a strong indication that, if properly nurtured, he can be a star as a left-handed batsman and offspinner.

In the first match, they defeated the St. Vincent Grammar School by 6 wickets.

Winning the toss and electing to take the field, the Petit Bordel bowlers wasted little time in asserting themselves as they removed the first three batsmen without any of them scoring. And from then onwards, the Peto team retained their stranglehold on the match as wickets fell rapidly.

They sent back half of the batting team by the time the total had reached 14, and were it not for an amazing 30 extras, the total of 51 could have possibly in the teens.

In all, four batsmen get not get off the mark and two batsmen ended on the topscore of five.

Petit Bordel replied 52/4 with Mathews who impressed all with his talent being runout for a topscore of 15. Jimmy Edwards made 12 as PBSS got home comfortably. Fastbowler Kemron Straugh, who showed glimpses of another talent “in the making”, took 1/18.

Thomas Saunders were then dismissed for 57 with opener Omarion Ottley carrying his bat for an unbeaten 29, which included 6 fours.

Offspinners Chavez Stapleton 3/3 and Mathews 3/9 did the damage for Petit Bordel.