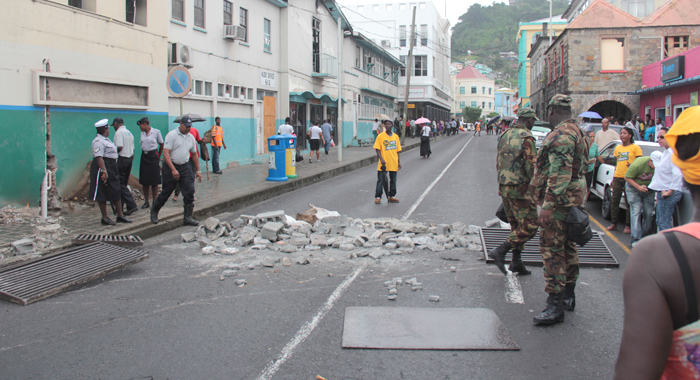 Opposition supporters dumped debris in the street as part of their protest in Kingstown on Dec. 14, 2015. (IWN photo)

The Christian Council said Monday that it “continues to be concerned about the political tension which prevails in the aftermath of the general elections” in St. Vincent and the Grenadines.

“This concern was initially communicated with the leaders of both political parties and the supervisor of the elections shortly after the elections,” the Council said, adding that on those occasions it appealed to both political leaders “to exercise wisdom, discretion and sound judgement in the leadership they offer their supporters”.

The main opposition New Democratic Party (NDP) had refused to accept the results of the Dec. 9 general elections, which electoral officials say were won by the incumbent Unity Labour Party, by a margin of eight seats to the NDP’s seven — a repeat of the December 2010 elections results.

Regional and hemispheric observers have said that the vote was free and fair, but the NDP has said that the ULP stole the elections and has filed two election petitions.

Opposition lawmakers have also refused to attend meetings of Parliament and its committees since the new Parliament was sworn in on Dec. 29.

The Council said that in its meeting with Prime Minister Ralph Gonsalves on the morning of Dec. 14, ahead of the swearing-in of the new Cabinet, “we responded to the appeal he had made for supporters to attend in party colours and indicated that such could only contribute to further aggravation of the situation and the polarising of persons at what is a national event.

“Out of this, though a late intervention, a press release was issued by the PM discouraging attending in party colours,” the Council said.

It said that in recent weeks, it has met with Gonsalves and Commissioner of Police, Michael Charles.

“Our meeting with the Commissioner allowed us to appreciate the complexity of their functioning in such a volatile situation. We reiterated the need to continually exercise discretion and wisdom even as they strive towards preserving law and order. We recommended a meeting of various civil society representatives to establish and delineate a way forward that is respectful and beneficial to all. Pending is a meeting with the Leader of the Opposition.

“As we have observed the developments thus far, we appreciate that conflict and disagreement are normal in human experience. However, how conflict is managed and/or resolved is a significant test of our maturity as a people and our development as a nation.

“To this end, we reiterate our commendation to the PM to be careful to remember that having been sworn in as PM translates PM for all and has a responsibility also to those who are aggrieved. We appeal in the strongest way to those who protest and to all who share various views to do so respectfully and without demeaning another. We commend the Opposition Leader for the commitment to peaceful protest he expressed in his meeting with us and encourage him to make every effort to preserve the integrity of this commitment,” the Council said.

There have been  protests daily outside the office of the Supervisor of Elections, Sylvia Findlay, since the election results were announced.

Several protesters were arrested, detained or charged by police and one media professional was detained for hours but released without charge.

The Council said: “For those, then, who may be tempted to hurl insults, curse or provoke the Supervisor of Elections, we encourage you to avoid such and preserve the dignity of your protest. We appeal to all to recognise that there will continue to be disagreements regarding this matter of the 2015 results as well as other issues which affect us as a nation.

“In many instances, there are systems and institutions to address these disputes; where such exist, this option should be properly exhausted first before alternative methods are explored. We appeal for mature and responsible use of information, for truth and for integrity. Much of our conflicts are informed or exasperated by the irresponsible use of or manipulation of information. This will never augur well for our society and serve for the most part a self-interest which fails to value and consider the other in love.

“May we proceed in this current situation as stewards of our nation and of a democracy that leaves a noble and mature legacy for generations to come.”