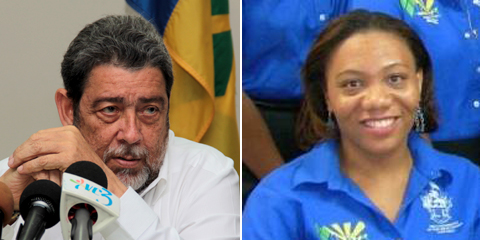 A journalist from the privately-owned, sole terrestrial television station in St. Vincent and the Grenadines on Monday reminded Prime Minister Ralph Gonsalves that the media house is not a government entity obliged to broadcast all state information.

The pronouncement by Sheron Garraway of SVG Broadcasting Corporation came during a press conference in which Gonsalves again accused SVGTV of having a bias against his Unity Labour Party (ULP) administration.

“Sheron, by the way, what I said about SVGTV ain’t intended for you, you know,” Gonsalves said when it was Garraway’s turn to ask questions.

“No,” Garraway responded, adding after a pause, “That is not the point. I work with SVG Broadcasting, so I am a part of the entity.”

“Yes. But I am just telling yo,” Gonsalves said.

“So that–” the Prime Minister began to say, when Garraway added:

“I do not agree with what you say, that is your opinion, Prime Minister. I have been criticised before.”

“Well, I tell you something, Sheron. If anybody does an objective analysis of SVGTV broadcasts, they will come inescapably to the conclusion that I have come to,” Gonsalves said.

Garraway responded: “Well the thing is, if we do carry all government work, then we will be called a state entity.”

The Prime Minister said he is not expecting the station to carry all government work.

“You are a private entity and I wouldn’t expect the National Broadcasting Corporation to carry government stuff.”

He apparently meant SVG Broadcasting, since the National Broadcasting Corporation is indeed a state entity, whose newscast are heavily focused on government information.

Gonsalves said that Garraway had done an interview with him, which was never aired.

The reporter, however, said that the interview will be aired as part of a series of interviews with leaders in the country for March — Heritage month.

Garraway said that as part of the series, she has also done interviews with lawyer Bayliss Frederick, Coast Guard Commandeer Brenton Cain, and Leader of the Opposition Leader Arnhim Eustace.

Garraway said that the media house plans to have sponsorship for the programme.

“With great respect,” Gonsalves responded, “When you interviewed me, it wasn’t for that. It was for something to be carried immediately because it was in part to redress the imbalance of the SVG news for the previous news. Because what you and I spoke about has nothing to do with heritage. Don’t mamaguy (deceive) me with that.”

Garraway told the Prime Minister that the television station has a responsibility to report on what is happening in the country.

“Prime Minister, we have a responsibility to carry things — if there is a protest in town, we cannot pretend it is not happening.”

“I am not saying you are not to carry protest,” Gonsalves responded.

“We must carry issues that affect the country, and we do come to you and find out your perspective. I must say, respectfully, we were turned away. We were turned away after you told us you would not be talking to us,” Garraway said.

“Absolutely, because you came to talk to me after you have carried all your biases,” the Prime Minister told the journalist.

Garraway also said that the Supervisor of Election has refused to speak to SVGTV. She said that the station has continually tried “to have two sides to the story”.

Garraway then began to ask a question about the geothermal project.

As she was asking the question, Gonsalves said, “You all must change alyo bias up there.”

In asking her question, she noted that the Opposition Leader has said that the project should not be a priority now in light of the falling oil prices and asked for the terms and conditions.

The reporter asked for Gonsalves response to the Opposition Leader’s view.

Gonsalves said he had outlined the terms and conditions during his press briefing.

“And let me say this, if the Leader of the Opposition wants to ask me something, he can come to Parliament and ask me. I’m not answering the leader of the opposition through the medium of you. Let me make that plain.”