Jomo sees nothing wrong with practicing law while being Speaker 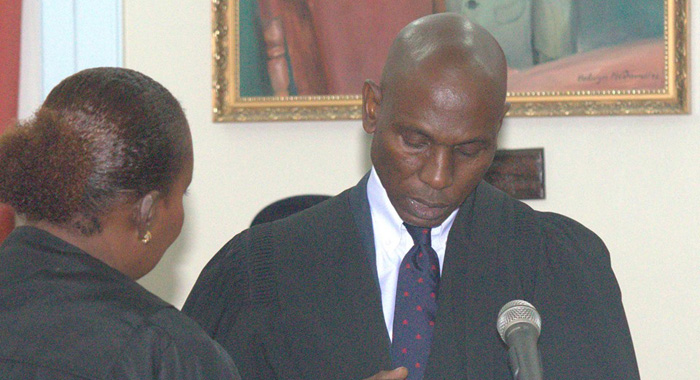 Jomo Thomas takes the oath as Speaker of the House of Assembly on Dec. 29, 2015. (Photo: Kingsley Roberts/Facebook)

Speaker of the House of Assembly Jomo Thomas says he sees nothing wrong with continuing to practice law while being Speaker — a full-time position.

“I don’t work part-time. I work full-time. There is nothing that I have had to do as a speaker that I have not done,” he told iWitness News on the weekend.

“I am a full-time worker as the Speaker of the Assembly. I don’t know if in people’s mind full time means that I can’t do anything else. I can tell you right now, if that’s what it means, and I had had this conversation with the Prime Minister, I would not have become the Speaker.”

Thomas, who failed in his bid to win the South Leeward seat for the ruling Unity Labour Party in the Dec. 9 general elections, was elected unopposed as House Speaker on Dec. 29.

There have been comments in some quarters that he continues to practise law while holding the Speaker’s position, which was made a full-time job since the ULP came to office.

Regardless his continuing practicing of law, Thomas told iWitness News:

“I don’t see a contradiction there at all. All the duties of the Speaker, since I was named Speaker on January 29, I carried those out. I meet diplomats, I speak to the staff at the office, we do things in keeping with the House of Assembly, I presided over the Estimates. I am preparing now for the Budget presentation Debate on the 22nd [of February]. I don’t see anything I have done or would do that would create any contradiction with that.”

Thomas is a lawyer for at least two clients who have filed high-profile cases against the government.

The cases were filed before Thomas was appointed a ULP senator in 2013. One of his clients, Otto Sam, who was dismissed from the Public Service, has won a case against the government, but the government has appealed.