Who is immature about beach access in Canouan? — activist (+Videos) 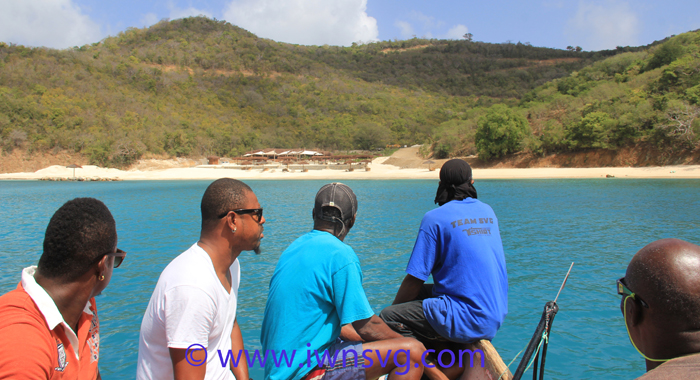 So near, yet so far: Canouan residents on Feb. 7, 2016 use boats to access L’Anse Guyac bay, a beach on the island, to which they are denied access by land. (IWN photo)

Canouan resident and community activist Terrance “Terry” Bynoe would like Prime Minister Ralph Gonsalves to say who is being immature about developments in Canouan, where residents are still fighting for land access to beaches.

The struggle in the Southern Grenadine island continues 16 years after Gonsalves, then as Opposition Leader, acted as lawyer for islanders in reaching a deal between the then New Democratic Party (NDP) government, developers and residents.

Among other things, the Agreement of Aug. 15, 2000 noted that, “Access to the beaches within the island area is a right of citizens of St. Vincent and the Grenadines in recognition of the fact that all beaches are public.”

Point number 3 of the Agreement said, “Access to all beaches shall be provided.”

But almost 15 years since Gonsalves was elected Prime Minister on March 28, 2001, residents have to take boats to access beaches on the island, as has been the case during protest picnics that have been taking place every Sunday over the past few weeks.

Canouan natives are opposed to the no-anchoring and kite surfing zone that the government has declared at L’anse Guyac beach, near Canouan Resort, saying that the yachts that anchor there are vital to the island’s economy.

“I appeal to all national throughout St. Vincent and the Grenadines and especially in Canouan to be mature in their reflections on this matter and not to do anything which would jeopardize the development of our country. Nobody is not taking away anybody’s rights; it’s just a regulatory regime to run things better,” Gonsalves told a press conference on Monday.

But Bynoe noted the 2000 Agreement to iWitness News on Thursday.

He said that when then Prime Minister, Sir James Mitchell, reached the Agreement with the parties, he treated islanders to drinks in the presence of Gonsalves, “celebrating a little partial victory.

“The next morning when I drove up there to see if the access was available, the company had already employed somebody and built a wall in the middle of the road in the night,” recounted Bynoe, who has been a leading figure in the struggle on the Southern Grenadine island.

“The thing never even got off the ground… So it was just an agreement that they didn’t upkeep. Even though the government had all these days of negotiating, they turn around and never let us through still,” he told iWitness News.

“Sixteen years after, we are still in this,” Bynoe said.

He told iWitness News that islanders had used Gonsalves as their lawyer because he was the Opposition Leader.

“So we say if he gets in he would have first-hand information about the situation and deal with it. It never got dealt with. A lot of the people who supported NDP at the time supported him, hoping that he was going to deal with it. And they turned around and changed their minds after he didn’t,” said Bynoe, who is still a supporter of and activist for Gonsalves’ Unity Labour Party.

Bynoe told iWitness News that he disagrees with a lot of things that were said at Gonsalves’ press conference, at which Director of Maritime Administration, David Robin, also spoke.

“I disagree with the free-for-all talk that the Prime Minister mentioned. Free-for-all for whom? Who is he protecting it for and from whom? The beach is for all. How come, in this case, it is for all the investors and their guests and not for us or visitors?” Bynoe told iWitness News.

Regarding the Prime Minister’s call for mature reflections, Bynoe said:

Canouan natives are planning a picnic for Godhal beach this Sunday.

Some of the most vocal critics of development on the islands are also supporters of Gonsalves’ government.

Bynoe said he is hoping that this reality will help their cause.

“We will hope so because the people are seeing that we are not playing politics on this matter. That’s why we come together on this issue,” he told iWitness News.

One reply on “Who is immature about beach access in Canouan? — activist (+Videos)”