All eyes on Pope as West Indies win U19 World Cup 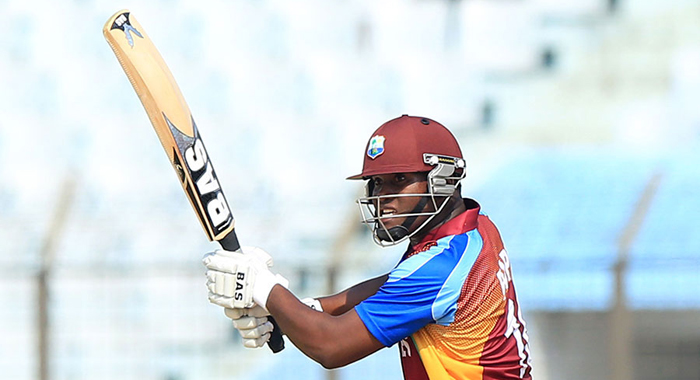 The West Indies became the second cricket-playing nation to win every trophy in world cricket when they won the ICC Under 19 title on Sunday in Bangladesh, beating India by three wickets in the final of the competition.

They were preceded to this feat by India, which was the first team to win the inaugural T20 and U15 titles.

On Sunday, the West Indies, replying to India’s 145, overcame the dicey position of 77 for 5 in search of 146 in order to win their very first Under-19 world title. It was done through the efforts of Keith Carty, who scored a patient 52, and, Kemo Paul, who was unbeaten on 40 at the end, in a match-winning partnership of 69 runs that secured victory and created history.

The West Indies team, which joined in matrimony with history on Valentine’s Day, included one Vincentian, Gidron Pope, who became the first player from his country to be in a world champion team.

He returned home on Wednesday and was met at the E.T Joshua Airport by family members, cricket officials, members of his local cricket team, The News Spartans, as well as Minister of Sports Cecil “Ces” McKie and Parliamenary Representative for South Central Windward from where Pope hails, Saboto Caesar.

But unlike some of his other teammates from other Caribbean countries, there were no champagne toasts. He was later reportedly taken to meet the Cabinet, which should have been in session.

When asked “to say a few words”, the shy and soft spoken Pope was just prepared to say thanks to the people who assisted him in reaching where he is.

“I feel real happy to be in the West Indies team that won the U19 tournament for the first time. It’s a great feeling,” he later said.

Pope, a powerfully built left-handed opener, received much attention during the tournament from opposing teams and commentators alike for his swashbuckling approach at the top of the innings, which, though it did not always come off, had appeared to an intimidating influence on bowlers.

He made a run-a-ball 60 against England and his 76 against Fiji was just as quick.

But it was his blitz against Zimbabwe and Pakistan — 30 and 25 — that helped West Indies swing those do-or-die games.

And, as a testimony to Pope’s impact, ESPNcricinfo wrote of the Vincentian: “A combative, expressive offspinner and flamboyant batsman from West Indies has caught the public eye in this Under-19 World Cup.”

However, despite the attention and the plaudits being given to the player on his performance at the ICC U19 tournament with his batting style, it is this approach and the impetuous nature of his stroke play that leaves his mentor, Nixon McClean of The News Spartans, hoarse and exasperated at times on the weekend.

“Come on Gidron!” “What kind of shot is that Gidron?” “Gidron you can’t be serious! Let the bowlers work for your wicket. Oh gawd, Gidron. Use your head — build an innings. Stewwppss. I just don’t know what to say to that boy again,” were some of McClean’s utterances.

But in between, there would be the “Good shot, Giddy “ or “Good innings, son”.

“He is a very talented player but he just needs to be kept focused, or he will try to play shots that are not on,” said McClean, a former West Indies fastbowler.

One of his weakness is that he finds it hard to make an adjustment when faced with good bowling. For him, it’s attack, attack. That wouldn’t work all the time,” McClean explained.

And speaking at the a short ceremony at E.T. Joshua Airport to welcome Pope, McClean, addressing the player, said:” None of the bowlers in that tournament got your wicket. But you and I will talk about that at The News Spartans level.”

Lennox John, the first Vincentian to have been part of a World Cup winning team when he managed the West Indies to the U15 title in 2000, feels that Pope has a bright future especially at the T20 version of the game.

“His style very much suits the shorter format and I expect him to get in with the Zouks in the CPL and possibly even further than that. I am happy with the impact he has made. I just hope that Nixon, Dawnley (Joseph) and the guys from Spartans keep him in check,” John said.

John also pointed out that the team manager, Grenada’s Dwain Gill, like him, is also a cricket president from the Windwards (Grenada) and this is something the people in the islands must be proud about.

He further said there were four players from the Windwards — Pope, Obed McCoy (SVG), Ryan John and Emmanuel Stewart — and that, in itself, was historic since the Windwards never had that many players in any regional team at one time.

McCoy, a tall slippery left-arm seamer, was later sent home after sustaining an injury to his hand and was replaced by Barbados’ Chemar Holder.

John also feels that something should be done with the young players so that they can develop their game and this may be done through the West Indies A & B teams, which were used to help with the development of players such as Brian Lara and others.

He said that while the individual players are not world-beaters, the team spirit and confidence exhibited by the team in tough situations augurs well for the future of the game in the region amid “all the chaos”.

But even as John is looking at what possibly lies ahead for the World Champions, ESPNCRICINFO is already setting a possible path to stardom for Pope.

“If the next few years go well for Pope, West Indies can expect a player who can hit the ball cleanly, bowl tight offbreaks, is keen on fairness and modesty, and knows how to support his team-mates,” the website said.

“The simplicity of Pope’s see-ball-hit-ball approach has been noticed in this tournament. Over the next few years, he will possibly have to deal with comparisons with Chris Gayle, T20 contracts, and playing for West Indies,” ESPNCRICINFO further said