Catholic Church ‘tardy’ in commenting on issues in SVG 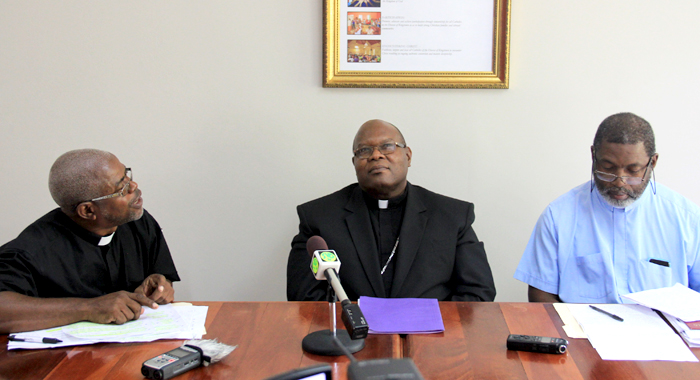 The Catholic Church in St. Vincent and the Grenadines says it has been, at times, tardy in speaking on issues of national importance, but has rejected the idea that it has remained totally silent at times when the nation struggled to find it moral compass.

And, as a new bishop prepares to take office, the church says has re-emphasised its “responsibility to speak on issues, not only of faith, but of morals”.

Trinidadian Gerard County, who spent the last 19 years in Mexico, will on Saturday be ordained at the Community College as Bishop of the Kingstown Diocese.

Unlike Mexico, which is predominantly Catholic, only 7 per cent of Vincentians identify themselves with the Roman Catholic faith.

The church in SVG, across denominations, has been criticised by some persons for having been too silent on issues of national importance.

Asked if he would be the type of bishop to comment on national issues, political ones even, when the nation is looking for a moral compass, County told iWitness News:

“I am coming into a new situation, a new country. I know very well that there is a process I have to follow, as I did 19 years ago when I went to Mexico.”

He said he has to “understand the situation I am coming into.

“I am not going to pretend that I know. I don’t know. And in the months and probably the year to come, my eyes will be opened, my ears would be open, my mouth shut, listening.”

County told iWitness News he will take time to understand the culture and people of SVG.

“I think that is very important I go through that process for respect for the situation I am going into. I have to learn. I will not be commenting on situations I don’t know about, because I need to go through that learning process, which is normal. That is why I have the clergy and the faithful to help me as well.”

Among the clergy present during this week’s interview was Monsignor Mike Stewart, who said that the church has always played a role in the life of the people, even outside of the spiritual.

Referring to iWitness News’ reference to “moral compass”, Stewart said the church has a responsibility to speak on issues, not only of faith but also of morals.

“What it is that makes for the good, for the development of society? What is it that indeed destroys? And, in so far as we are aware of, issues which are destructive to us, and which does not uphold the dignity of the human person, the church has a responsibility to exercise what we call its prophetic ministry.

“So, when we exercise our prophetic ministry, our prophetic mission, we are, like Jesus, bringing good news to the poor, setting the downtrodden free, as we have it in Isaiah and the gospel of Luke.”

But the church was deafeningly silent during the campaign for the Dec. 9 general election when a “sex tapes” containing a voice sounding like a prominent politician emerged.

Many persons, including Christians and the main opposition New Democratic Party, said the tape was not an election issue, seeming to adopt the view that what consenting adults do is not the business of the public.

But, Stewart told iWitness News that followers of Jesus Christ, must be concerned about the standards set by leaders at all levels of the society.

“I think it is important because we lead not just by what we say, but by what we do. And it’s that doing that attracts attention. It’s that doing that challenges others to do likewise. If we are leading, we should really lead not just by our word, either as political leaders or religious leaders, but, more so, by our deeds. By your fruits, the scripture says, you would know them,” Stewart told iWitness News.

County is being ordained at a time when the Christian community, internationally, is confronted by the rise in secularism.

County said this was being discussed even when he was at seminary, and was identified as the greatest threat to the church.

“And I am seeing that. It is a challenge. In all that, you bring the gospel message to people and you live that. I think it is in the living out that you will be able to counteract. I don’t now if it is counteract but bring people in to be able to live their faith.”

He said Pope Francis has called for a church where the pastors are very near to our people, “working very closely with them, the pastors smelling of the sheep … being with the people, sharing with them, sharing their joys and pains, that makes the difference in a world today that is very secularise with many different option.”

And, even within the Christian community, the Roman Catholic Church is facing the dominance and rising popularity of the protestant faith.

County told iWitness News that while the Catholic Church is not competing, “We have to reflect on what is happening, why is that happening.”