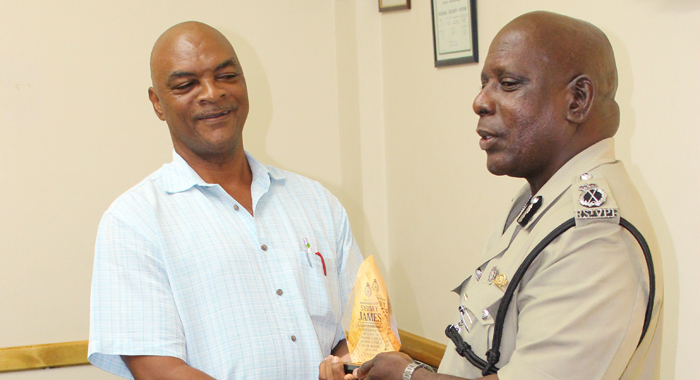 Assistant Superintendent of Police, Sydney James, regarded as one of this country’s best homicide investigators, has proceeded on pre-retirement leave.

James is widely known locally and regionally for his investigative skills. He spent most of his career at the Criminal Investigations Department and was in charge of the department for a period.

Before proceeding on pre-retirement leave, he was last stationed at the South Central Division.

The members of the officer corp paid tributes to James recently. There was a consensus that James was a humble, pleasant and knowledgeable police officer, who left a legacy for his skills of investigation.

At the ceremony, a video was shown with tributes from persons who James worked with. Tributes also came from Director of Public Prosecutions, Colin Williams; senior prosecutor, Adolphus Delplesche; President of the Police Welfare Association, Inspector of Police Trevor Bailey; and Inspector Atland Browne, head of the Major Crime Unit.

Some persons said that they will remember James for his sayings, such as “Beat the iron while it’s hot”, “Everything is everything”, “I frighten”, “Wad up”, and “The factest of the fact”.

James, responding to the tributes, tried to control his emotions. He shared his journey and quoted the words of retired Commissioner of Police, Osborne Quow, “Man can come, but man must go.”

He said he only spent two months in civilian life when he arrived in St. Vincent and the Grenadines and will certainly miss the Police Force, and expressed thanks for the tributes.