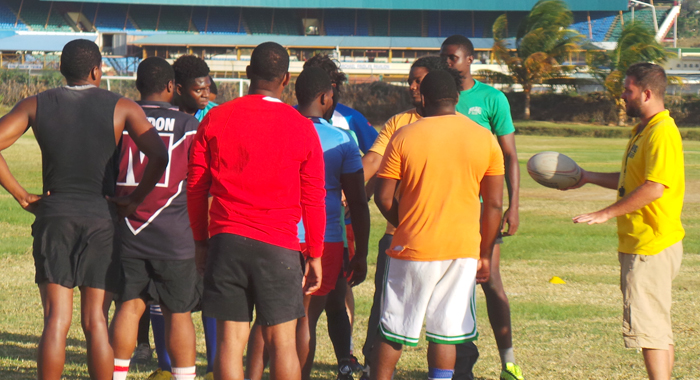 Coach of the St. Vincent and the Grenadines (SVG) Senior National Men’s Rugby Team, Mike Jackson is confident that his team will give a good account of themselves in their 2019 World Cup Qualifier against Jamaica at the Arnos Vale Playing Field on Saturday.

Jackson, speaking at one of the team’s training sessions at the Sion Hill Playing Field, said that while they are going into the game as the underdogs, he is quietly confident that they would be competitive against opponents who are more experienced and, possibly, more talented.

“I know you’ve got to be guarded with your confidence but I’ve been working with the boys for a while now and they’ve been coming on, and, hopefully, if we do everything right, who knows what can happen at the end of the game,” said Jackson, who has been the team since September.

Asked how much he knows about the Jamaicans, Jackson, an American who came to SVG from the Virgin Islands, said “a fair amount”.

”They are a good team. They’ve got a good individual players. A little unstructured. So that’s an area that we can, maybe, take advantage of .Hopefully, with overconfidence coming into it and with us having home field advantage,  we can maybe shake them a little and let them regret coming here a bit too overconfident,” said Jackson, a coach of more than 15 years’ experience.

Jackson said that the relatively inexperienced situation with the SVG team may probably work to their advantage in Saturday’s encounter.

“ A lot of the teams in the West Indies have been taught the old fashioned way and I’ve come in here and have tried to be more of a contemporary coach, so I teach a modern game and because these guys have not been taught those old ways of playing, it has allowed me to introduce these new ways of playing to them and they’ve taken them on quite quickly and that, certainly, I would say, is an advantage,” he said.

He said that the team also has some good athletes and the players want to do good, and, therefore, he “cannot see them just going and lying down on Saturday”.

Jackson said he did not wish to identify his team’s “players to watch” but instead urged the public to attend Saturday’s match, which is set to get going at 2 p.m. at the main Arnos Vale Playing Field.

And, President of the SVG Rugby Union, Sophie Goddard, feels that her organisation is up to the task of hosting the opening match of the 2019 World Cup Qualifier.

Goddard said that the organisation recognised the magnitude of their responsibilities and is doing everything in their power in making sure they put on a good event.

“We knew of the match but the dates were released not too long ago. But even, so we are making every effort to have a good event, since we will be the focus of the Rugby World. It’s a great chance to showcase St. Vincent and the Grenadines and we intend to do our part,” Goddard said, flashing a girlish smile.

She is hoping that with the hosting of the high-profile match, more people will gravitate toward the sport, which, she said, been in SVG since 1998 but has found it difficult to take root.

Should SVG get past Jamaica, they would enter a group with Barbados, Guyana and Trinidad and continue the bet phase of the play-offs.

Officials say the match in SVG is being seen as an important occasion for World Rugby as it signals the start of a process involving more than 80 teams around the globe that will eventually be reduced to eight qualifiers. Those eight will join the 12 previously qualified teams for RWC 2019 in Japan.

The match will be refereed by Nigel Owens, who took charge of Rugby World Cup final 2015 between New Zealand and Australia in England last year. In addition, the famous Webb Ellis Cup, which is currently being held by the champions, New Zealand will also be on display.