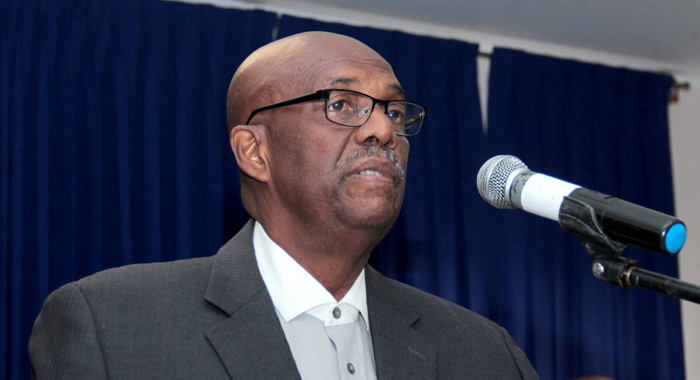 Leader of the Opposition and Arnhim Eustace. (IWN file photo)

Leader of the Opposition Arnhim Eustace on Monday described as “serious level of taxation” the fiscal measures that were part of the 2016 Budget that Parliament approved last week without input from the opposition, which boycotted the debate.

He said the moniker came about because the Gonsalves Government has added cooking salt to the items on which 15 per cent value added tax (VAT) is to be charged, beginning this year.

Eustace told the gathering at Frenches House and media audiences that by imposing VAT on the 10 or so new items, the Government “is going to take eight million dollars or so out of your pocket.

“So this year, you are going to pay eight million dollars more in VAT just for those items there alone,” he reiterated, adding that previously, the Government collected about EC$75 million in VAT, annually.

“So, this is not a joke you know. This is serious level of taxation,” he said, adding that he does not know that VAT on the new items will do to the price of bread.

Eustace pointed out that his New Democratic Party had promised before the Dec. 9 general elections that it would have removed VAT from a number of items.

But Gonsalves, in presenting the EC$912 million budget in Parliament last week, announced a new 2 per cent tax on cellphone calls in addition to increases in property tax on commercial buildings, driver’s licenses, and gun licenses.

The Finance Minister also announced the introduction of VAT on packaged rice for retail sale; table and cooking butter; brown sugar; and whole chicken and chicken parts, except chicken back, neck and wings.

Gonsalves said the new measures are intended to widen the tax base and improve buoyancy.

They were coming at a time when the Budget included an EC$151 million deficit.

Eustace also pointed out that the fiscal package included excise taxes on some beverages and increases in driver’s licence and property tax.

He spelt out, in monetary terms, the implications of the increases in motor vehicle licences.

“They gone up a hundred, a hundred and fifty, two hundred dollars in some cases,” he said, adding, “And that is a whole long list of things here.”

“You don’t hear about those, because they are in an appendix in the back and they are not read out. But I am reading them out now. This is part of the budget. And there are many others,” Eustace said.

He said that omnibuses of three tonnes licenced to carry passengers only used to pay an annual licence fee of EC$425, but will now pay EC$575.

“And let me tell you, all these rates include the minibuses also. So we have to wait and see what happens when people start to ask for fare increase.”

Eustace noted that driver’s licences have been increased, and added that a learner’s permit has increased from EC$65 to EC$100.

“Conductor for minibuses used to be 10 dollars, now it gone to 15. What you move it for?” Eustace said.

“So what I am trying to show you, a lot of other taxes have been increased in this budget. So far, I have counted about 14-15 million dollars in other taxes,” said Eustace, an economist and former finance minister.

The government has also increased the environmental tax on the importation of vehicles that are more than four years old.

“That tax has now got another tax on it,” Eustace said.

For coaches, buses and minibuses which carry fewer than 21 persons, the tax was EC$3,500. It has been increased by EC$500.

For coaches, buses and minibuses of a seating capacity exceeding 29 persons and including the driver, the tax has been increased from EC$4,500 to EC$5,200.

“So you have a whole list, a long list of items, that have been here for motorcars and other items and they have gone up by significant prices. Even the trucks that carry the cement, those are taxed also with an addition 5,700 dollars. Those things add up to cost for people who are doing business. It is going to cost you, the taxpayers, more,” Eustace said.

“We can’t just let these things past. We have to understand that is what we are dealing with. And I am saying to you, I do not believe that this budget can meet its target of increasing economic growth or increasing job or doing anything for our fiscal situation, except making it worse.”

Eustace said there were a number of “errors and difficulties” which would make the budget “much less than meaningful”.

He noted that Gonsalves had said that the central themes of the 2016 Budget are economic growth, job creation, zero hunger and fiscal consolidation.

“Now, if you are in fact moving to fiscal consolidation, which he says is one of the main aspects to be covered, then you are starting off on the same old foot that you had before. It is getting worse, not better,” Eustace said.

He said that to make up for the shortfall, the government has to   borrow, get grants or “pretend that certain things can give you increased revenue.

“And I want to say a word about that now. I have said it now consecutively for ten years. And that’s why I don’t miss talking in the Parliament because these points have been made in the Parliament over and over every year in the case of the Budget. The government does not ever listen, nor does it make any effort to deal with this issue,” he said.

Eustace said that to cover the deficit, the government inserts a figure under “Other Capital Receipts”, but always fails to raise the amount, and, therefore, cuts back on the Capital Budget.

“So when you look at the estimates for 2016, the amount of money remaining for doing projects, including building roads and so on, is 100 million less than the year you had before. So how [are] you going to do it?

“How is this going to increase jobs?” he said, noting that Gonsalves had said that a main aspect of the budget is job creation.

“But the shortage of the finances is constraining your ability to create job, so unemployment continues to grow,” Eustace said.

Opposition lawmakers stayed away from last week’s Budget Debate as part of their on-going protest of the result of the Dec. 9 general elections, which they claim that Gonsalves’ Unity Labour Party stole.

The NDP is contesting the results in court.

One reply on “‘Serious level of taxation’ in 2016 Budget — Eustace”