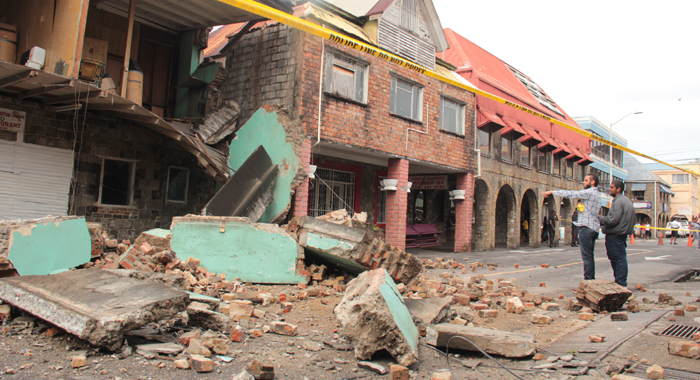 Miraculously, there were no reports of injuries or damage to other property as a result of the collapse. (IWN photo)

Engineers from the Ministry of Works were mid-morning Thursday awaiting the go ahead to enter and assess a building in Kingstown that partially collapsed sometime before 7 a.m.

There were no reports of injury or damage to other property when the section of the building, which formerly housed “The Horseshoe Restaurant” on Grenville Street gave way.

The two-storey building is built with ballast bricks and has a wooden upper floor and partition.

it is located obliquely opposite The Music Centre.

Heavy equipment had cleared the road and sidewalk of debris by 11 a.m.

An engineer with the Ministry of Works told iWitness News that with the clean up complete, officials were waiting for the electricity to be disconnected.

Structural engineers would then enter the premises to assess the extent to which the building is compromised.

He said engineers would also tear down on Thursday a segment of the building overhanging the sidewalks that remained standing after the other section collapsed.

The building house a salon, and street vendors also used some parts of its to store their wares.

The vendors were among onlookers on the sidewalk on the other side of the street.

One of them told iWitness News that they had been told that they would be updated after engineered had assessed the building.

He, however, noted that that final determination would be made after engineers complete their assessment.

3 replies on “Section of building in Kingstown collapses (+Video)”